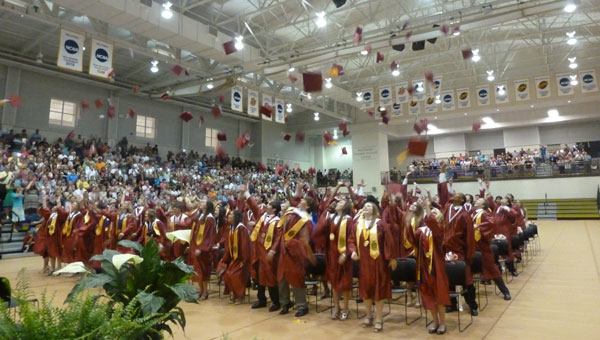 By PHOEBE DONALD ROBINSON / For the Reporter

MONTEVALLO — The McChesney Student Activity Center arena at the University of Montevallo was filled to capacity with family and friends as 114 seniors graduated from Shelby County High School on May 23.

Principal Gene Rogers opened graduation followed by the a cappella rendition of the Star Spangled Banner by the SCHS choir led by Deborah Petipas and invocation by Pastor David Reed of Refuge Baptist Church of Clanton.

Senior sponsor Anne Stansell awarded the Johnson-Pope Award to Jacqueline McCrary Head, the highest honor given to a senior presented each year at graduation.

— Tiffany Tiara Thomas: Linly Heflin, Smith and UMUB Scholarships for a total of $72,325.

No injuries after medical emergency at PHS graduation

No injuries were reported after a medical emergency at the Pelham High School graduation on May 23 at the Pelham... read more