No injuries after suspicious package reported at Pelham shopping center 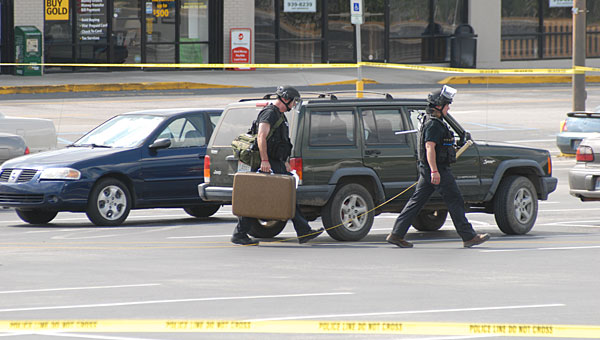 Members of the Hoover Police Department bomb squad carry a suitcase off the scene near Pelham’s Big Lots store after an off-duty police officer reported the suspicious package on May 28. (Reporter Photo/Neal Wagner)

PELHAM – A suspicious suitcase found in the parking lot surrounding Big Lots and Staples off U.S. 31 in Pelham was found to be empty, according to law enforcement officials on the scene.

The Pelham Police Department received a call at about 1:55 p.m. from an off-duty police officer who reported a suspicious brown suitcase sitting in the parking lot, according to Pelham police officials.

While officers were investigating the suitcase, no vehicles were allowed to enter or exit the parking lot in front of Staples and Big Lots. The southern half of the shopping center, which is near the Pelham-Alabaster city line, remained open to traffic throughout the incident.

Police loaded the suitcase into a Hoover police vehicle, and reopened the parking lot to the public at about 4 p.m.

“It looks like someone just wanted to get rid of an old suitcase and sat it down in the parking lot,” said Pelham police Capt. Larry Palmer. “I’m tickled to death that it didn’t turn out to be a device. In this day and age, you can never be too careful about these things.”

Certificate of need process a hindrance

By JAN GRIFFEY / Editor Last week, after arriving home from work, I discovered one of the cats for which... read more