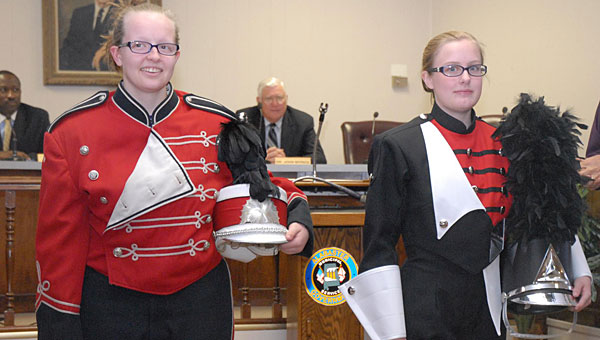 Thompson High School band members Suzanne Berry, left, and Mary Beth Moore, right, give the Alabaster School Board members a comparison of the band’s old uniform, left, and the new uniform, right, during a recent meeting. A dunking booth at this weekend’s CityFest will raise money to pay off the new uniforms. (File)

A slew of Alabaster public figures will take plunges in a dunking booth during the June 1 CityFest event in an effort to help the Thompson High School marching band procure new uniforms for the upcoming school year.

Throughout the day, everyone from school principals to Alabaster’s mayor will take turns in the dunking booth to help raise money for the cause. All money raised will be used to help pay off the band’s new uniforms, which must be paid for before they are put into service, according to THS Director of Bands Jon Bubbett.

“While we have been pretty successful in our fundraising efforts, we are still around $24,000 shy of meeting our goal,” said Greg Hussey, who worked to organize the dunking booth fundraiser. “Not wanting our kids in jeans and T-shirts this fall, we are trying numerous fundraising events to try and help.”

Some of the THS band’s current uniforms are nearly two decades old, and have been in service longer than some band members have been alive. Individual and corporate donors have already raised the majority of the new uniforms’ more-than-$70,000 price tag, but the band is looking to pay the remainder this summer.

The dunking booth will kick off at 10 a.m., and three balls can be purchased for $1. Hussey said several booth participants have agreed to match a certain amount of money raised during the fundraiser.

The dunking booth schedule is as follows:

City overwhelmed with donations for Oklahoma

By NEAL WAGNER / City Editor While most were enjoying time off work during the Memorial Day, a group of... read more