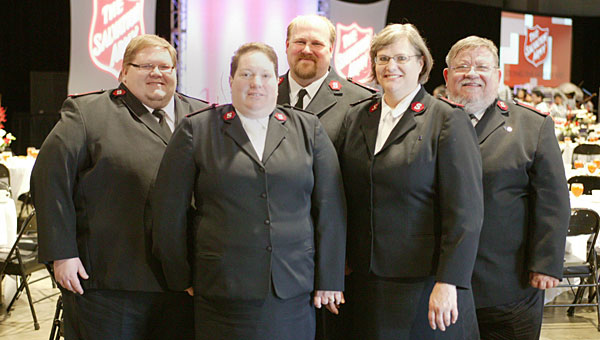 After hearing of the devastation wrought by the May 20 EF5 tornado in Moore, Okla., Alabama Salvation Army Lt. Brian Leonard knew the call may be coming.

“In the Salvation Army, you can be deployed to disaster areas if you are needed. I got a phone call from my boss, and I was ready to go,” Leonard said during a May 29 interview. “We are excited to help and honored to have the chance to go up there from Alabama.”

On June 7, Leonard, who is with the Salvation Army’s Alabaster location, will join two officers from Mobile and one officer each from Decatur, Gadsden and Huntsville as they travel to Oklahoma to help in the region’s recovery efforts after the devastating storm.

The Alabama group will serve in Oklahoma until June 21, at which time it could be replaced by another team if necessary.

“This is what the Salvation Army calls a territorial disaster. Right now, there is a team from Florida deployed up there, and we will replace them on the seventh,” Leonard said. “A new team may replace us after the 21st if needed.”

Leonard and his Alabama colleagues will help in the Salvation Army’s transition from immediate to long-term recovery for the storm victims. Once he arrives in Moore, Leonard will oversee the Salvation Army’s supply warehouses, which have seen an influx in donations from across the country since the storm.

“My job will be to manage and organize the items in our warehouse so we can get them to where they are needed,” Leonard said. “From what I’ve heard, the warehouse is almost full right now, and we may have to get a second one to hold everything.

For Leonard, a Florida native, his service with the Salvation Army has trained him well to handle disaster recovery.

“I’ve helped with hurricanes and a few tornadoes, so this is far from my first deployment,” Leonard said. “I’m just honored to help.”

To donate to the Birmingham Salvation Army’s relief efforts in Oklahoma, visit Birminghamsalvationarmy.org.

Indian Springs Village Council minutes for the week of May 29, 2013