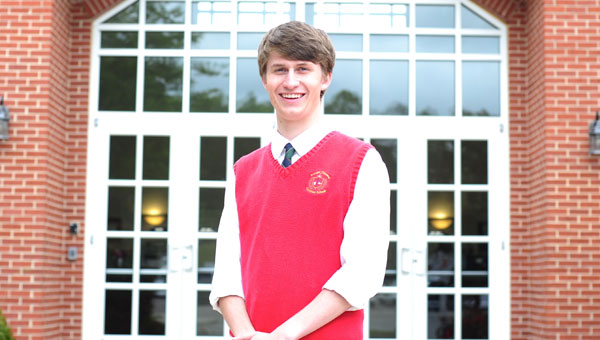 If Charlie Bell were to write a book titled “How to be a Role Model,” the directions would actually be quite simple.

“I try to make sure that my behavior is acceptable in everyone’s sight,” he said. “I try to imagine if there were a third grader in the room, would I still be OK saying what I’m saying, or doing what I’m doing. If it doesn’t pass that test, then it is better left unsaid or undone. I try to remain above reproach in all my actions and choices.”

Charlie will be graduating this spring, but before he goes, the yearbook staff might want to plan an extra page to list all of his accomplishments. He is class valedictorian and a National Merit Finalist.  He has received scholarship offers from three different universities and has also logged more than 300 service hours by volunteering as junior interpreter at the American Village, recreating roles such as Nathan Hale, a British Red Coat and a soldier in George Washington’s militia.

But, according to Charlie the role that he has most embraced is that of House Leader at his school.

“This has been one of the most rewarding experiences I’ve ever had,” he said, explaining that Evangel is patterned after the British boarding school system where students of all ages are assigned to one of six houses.

“This system has given me a little family,” he said. “I know every single person from sixth graders to seniors.  Evangel has done a lot for me both academically and spiritually.  The teachers really care and the students really care about each other.  That’s the sort of environment I want to create wherever I go.  I want to make people feel comfortable and at home.”

Following graduation, Charlie plans to study communications and theater at Mississippi University.   His goal is to get a PhD to enable him to “bring Christ to a secular setting.”