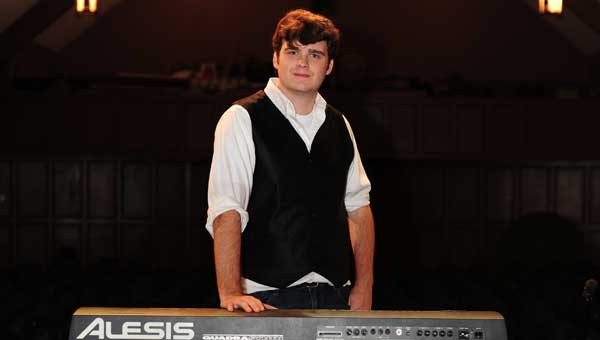 Kingwood Christian School senior Brody Miller will try out for the University of Alabama’s Million Dollar Band this summer. (Photo by Jon Goering/For the Reporter.)

When Brody Miller, a senior at Kingwood Christian School (KCS) was just a small child, he remembers sitting at his great-grandfather’s knee listening to the old man play the harmonica.

“My great-grandfather always inspired me,” Brody said. “My favorite was a song he played about a little apple tree. Watching him was just amazing to me.”

That love of music eventually took Brody to the KCS band not on the harmonica, but on the saxophone. “I really liked the sax because of its soulful sound,” he said. “I played the alto originally, but I’m a pretty big kid so it was actually a little small for me.

“When the band lost its bass instrument, I thought that was a good chance for me to get more versatile on the sax,” he added. “My parents got me one for Christmas that year and, ever since then, I’ve always asked for a sax. So far, I’ve collected a soprano, alto, tenor and the baritone.”

And, he plays them all. Brody started playing in the KCS band when he was in the fifth grade and for the past three years has served as student director, a role he takes seriously, even tutoring younger band members. But, music is not this outstanding student’s only accomplishment. He also excels academically and is president of the Beta Club, Vice-President Mu Alpha Theta, a math honorary society and he was voted Mr. KCS.

He will be attending the University of Alabama in the fall working toward an engineering degree, but this summer he will be working for a spot in the Million Dollar Marching Band when he attends try outs. Brody says he can’t see a time when he won’t be playing the saxophone.

“Band is my lifestyle. It represents me as a whole,” he said. “It would be very difficult to imagine a time in my life when music is not a part of it and I’m not playing the sax.”