Somerby residents take a ride around the Talladega Motor Speedway 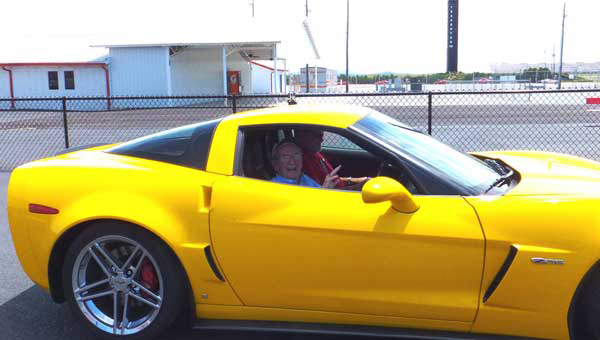 Ray Smith took a ride around the Talladega Motor Speedway during a Vettes 4 Vets event over the Memorial Day weekend. (Contributed.)

During World War II, Bill Morgan flew planes for his country, but on Memorial Day weekend this 94-year-old Air Force veteran was doing a different sort of “flying,” as he zoomed around the Talladega Motor Speedway in a yellow corvette.

Morgan and several other residents at Somerby at St. Vincent’s One Nineteen were invited to be part of this year’s Vettes 4 Vets event. The Vettes 4 Vets Foundation sponsors fundraising events through the year and distributes funds to non-profit organizations that support veterans or military personnel.

This year, more than 150 Corvette owners from 12 southeastern states gathered for the annual ride.

“It was really a lot of fun,” said Morgan, whose car reached speeds in excess of 135 miles an hour. “I would gladly do it again if I got the chance.”

The high speeds did not faze Morgan, who said it felt like the car was going 90 miles per hour. However, he admitted that he did not tell his daughter what he was up to before the event.

“I guess you would call us the dare devils,” said Teria Chastain, as she recalled her turn at Talladega at 142 miles in a white corvette with a red racing stripe down the middle.

“I agreed to go first, “ she added. “I knew I better do it before I changed my mind.”

Chastain said her driver took to the wall surrounding the track.

“When you bank sideways it’s like being in a small plane. You’re looking down and I was thinking what if this thing falls off this wall,” she said. “ It was a thrill. I think everybody should do this.”