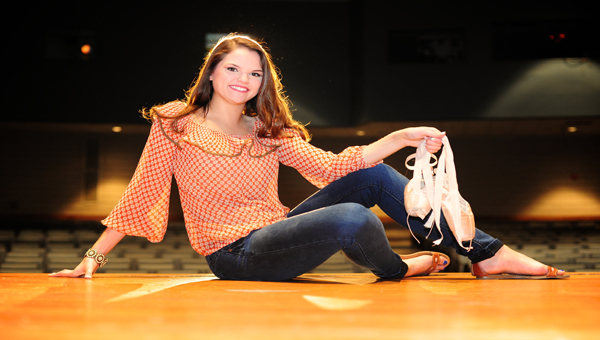 Maddie Gathings’ compassion and philanthropic spirit is rooted in her own personal tragedy. At the age of 17, her boyfriend Carson Sumpter died from cancer.  Maddie never left his side during the year he fought the disease.

“Ours was not the average high school relationship,” Maddie said.  “You know you pray all your life for the person that God wants you to be with, but as my mom said, we never expected him to walk in when I was 16. My relationship with Carson was the most influential in my life and probably will remain so.”

The loss of Carson led Maddie to seek a way to fight cancer. She found what she was looking for in the American Cancer Society and Relay for Life.

“Carson’s story impacted me to go out and fight this disease,” Maddie said.  “Relay for Life is one of the outlets I can use to do that.”

Another therapeutic activity for Maddie has been dancing.

“It is my life,” she said. “I’ve always loved dancing since I was 3 years old and I when I saw the Pantherettes perform for the first time I said, ‘I am going to be one of those girls.’”

That goal became reality her freshman year when she tried out and made the Pelham High School dance team.  Since that time, she has been voted homecoming queen and runner up to Miss PHS.   She has a GPA of 3.89 and is a salutatorian.

“After going through what I did with Carson, I can’t imagine doing anything else,” said Maddie. “So many times we had questions. If we had just had somebody to provide answers and be a mentor to us, it would have helped ease the burden.  Now, if I can provide that for anybody, that’s what I want to do.  I feel like God has given me this mission.”

Local author encourages kids to do what they love