Weidenbach in a league of his own 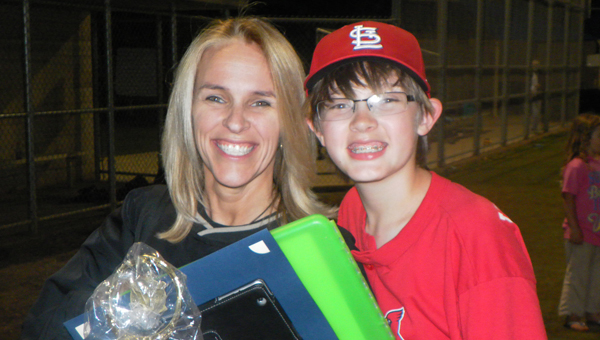 For love of the game: Bishop (pictured with his mother, Lori) gave up playing baseball and became a manager for Coach Craig Pearce and the Cardinals.

Retirement is something all athletes must face one day. All athletes come to a crossroads where they must decide whether to try and give it one more season, or give up playing the game they love to pursue other opportunities.

Alabaster resident Bishop Weidenbach found himself at the same crossroads at the beginning of the Alabaster Youth League Baseball season; he and his family knew the pace of game was too fast for him to be competitive anymore. So, with just a few weeks before tryouts, 13-year-old Bishop retired from playing the game he loved so much.

Bishop was born with persistent pulmonary hypertension of the newborn, or PPHN. He also had a stroke at birth, leaving him without use of his right hand.

“Basically, (PPHN) is where his lungs weren’t working,” said his mother, Lori. “They did an MRI at three months old, and saw a big black spot on his brain. It was spinal fluid.”

Lori said she and her husband, Michael, did their best to take the news in stride.

“(The stroke) was one of those things that just happened,” she said.  “Was it caused by PPHN? I have no idea. He wasn’t premature, I didn’t have any difficulty during pregnancy.”

Still, the stroke left Bishop with some permanent damage.

“Basically, he has a very mild form of cerebral palsy,” Lori said.

According to Lori, as Bishop grew, he never allowed what happened to him affect how he approached life.

“He just always wants to be submerged (in sports),” Lori said. He soaks it all up. I just never discouraged that.”

After playing baseball for a year for the YMCA, Bishop began playing for the city leagues. While not having use of his right hand put him at a considerable disadvantage, he worked out a method to play the field. He wore his glove on his left hand, and would catch balls with it, then would remove the glove and place the ball in his hand to throw with one move. He also batted one-handed. 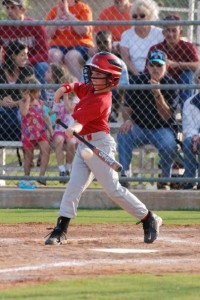 Bishop taught himself to field, throw and bat all with one hand. (Contributed/Lori Weidenbach)

Lori said fielding was never an issue for him; instead any problems he ran into came at the plate.

“The one time I got sad was during machine pitching,” she said. “He swung at 30 pitches and didn’t hit a one. He kept going and didn’t get upset. I just cried. I saw him just not give up. He never hit the ball, but he never quit.”

He continued to play until he reached the 13 and 14-year-old age group where he played for a year, but began to struggle to keep up with the speed of the game.

“I struggled with (the decision to not let Bishop play),” Lori said. “Because I love Bishop playing. I told my husband, ‘I just don’t think he can compete (at the pace at which they play).’”

So, after eight years, Bishop retired from playing baseball. He was far from being done with the game, however. Coach Craig Pearce had Bishop on several teams in the past, and was alarmed when he didn’t see him available to play.

“The kid has best attitude in the world,” he said. “He doesn’t see himself as any different.”

When he was informed Bishop was not playing, he approached Lori and Bishop about the possibility of him becoming a manager on Pearce’s team, the Cardinals. Bishop agreed, and assumed the duties of preparing the lineup card, keeping up with the pitch count, ensuring the Cardinals didn’t bat out of order, and serving as a bat boy while being a motivational force for the team as well.

“He fires these kids up,” Pearce said. “Anytime a kid would make a mistake, he was the first one to pat him on the back. He was a source of encouragement.”

Pearce said Bishop’s positive attitude spread to the rest of the team.

It’s like he’s contagious,” he said. “Kids can be mean, but he gathered their respect.”

His hard work paid off, as the Cardinals won the league championship, which was a first for Bishop. Although his playing days were over, he had finally been a part of a winning effort.