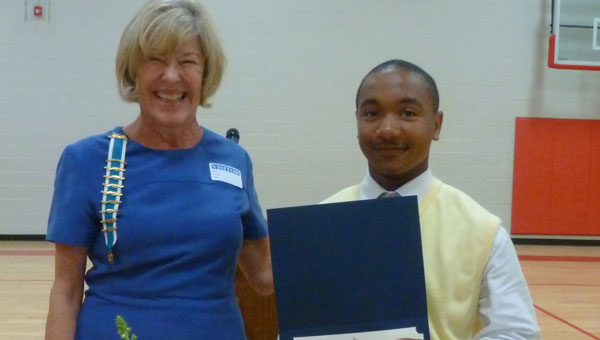 Since 1934, the Daughters of the American Revolution have awarded deserving students the Good Citizenship Award, which recognizes students who possess outstanding qualities of honor, service, courage, leadership and patriotism.

Chapple is a member of the Flag Team, earning his Eagle Scout, plays football, serves as library aide, ushers at Harvest Place, has exemplary attendance and models strong character daily. He also won the womanless pageant supporting the Relay for Life.

Johnson is an office aide, member of basketball team and is dependable and conscientious.

Farwell is an actress and played Witch Waye in the play “Robin Hood” and dances at That’s the Pointe studio. She is a diligent, thoughtful and helpful worker.

Sellers is vice president of the Student Council, member of First Priority Team, excels academically and has excellent attendance record.

Nielsen is a special needs student and loved by the entire student body. He exemplifies courage daily with a smile.

Hinch is an A student, volunteered to be a math tutor and is extremely helpful.

Smith is an ethical leader, hardworking, intelligent and kind.

David Lindsay meets at 1 p.m. first Wednesday of months September through April except January at the Columbiana Public Library. DAR is open to all women who can prove a direct lineal American Revolution ancestor.