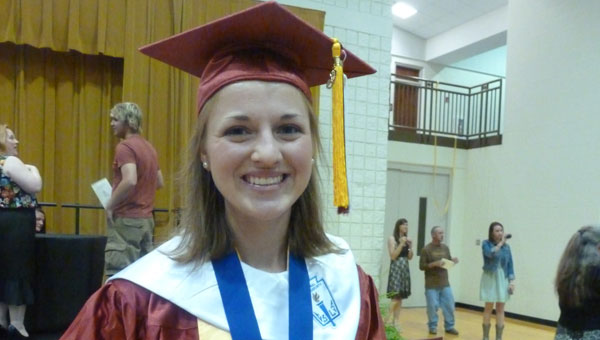 Jacqueline Head, SCHS valedictorian and winner of the Johnson-Pope Award, the highest award given to a SCHS student, will attend the United States Military Academy at West Point beginning July 1. (contributed)

Jacqueline Head has been appointed to the United States Military Academy at West Point, the first female from Shelby County High School to receive this prestigious honor.

Her journey is a story of hard work, courageous determination and strong faith.

Head’s roots go deep in Columbiana. She is the oldest daughter of attorney Frank Head and Jennifer Joiner Head.

Head excelled in Columbiana schools. She was a member of National Honor Society, was valedictorian and winner of the Johnson-Pope Award, the highest honor given to a SCHS student.

She was president of the SCHS Key Club and held the state position of lieutenant governor for Division 6.

Head’s passion is running. Extremely goal-oriented, Head dreamed of being a top state cross country runner and was third in state her sophomore year.

However, stress fractures in her junior and senior years stopped her meteoric rise and tested her mentally, emotionally and physically. Head never wavered in her goal to compete again and did.

Head’s deep faith and strong work ethic drove her though crutches, physical therapy and eventual healing as she set her goal to attend West Point.

In February 2012 Head attended the National Youth Leadership Forum in Washington D.C., where she learned that national security was a career path she might enjoy.

In summer 2012, Head spent a week at the Summer Leaders Seminar at West Point. She loved every aspect of West Point: classes, setting, formations and structure.

She completed her interview and candidate fitness tests that week and came home committed to finish the rigorous application process.

On April 25, she received the call from Congressman Spencer Bachus’ office and will enter West Point on July 1 as a member of the Corps of Cadets.