New law lays out punishments for trespassing on a bus 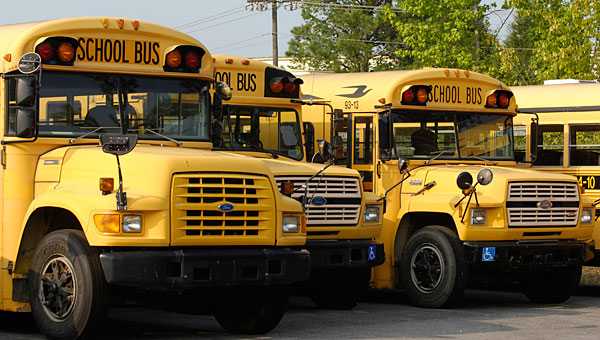 A Cam Ward-sponsored bill making it a crime to trespass on a bus was recently signed into law. (File)

A new law sponsored in the Alabama Senate by state Sen. Cam Ward, R-Alabaster, makes it a Class A misdemeanor and lays out possible jail time for those convicted of trespassing on a school bus.

The law, which is named in honor of slain Dale County school bus driver Charles “Chuck” Poland Jr., recently was signed into law by Alabama Gov. Robert Bentley after it passed the state Senate and House of Representatives during the 2013 session.

Poland was shot and killed on Jan. 29 after a gunman boarded his school bus and demanded child hostages. After Poland was killed, the gunman took one student hostage in an underground bunker before the student was rescued by law enforcement six days later.

According to the law, a person trespasses on a bus if they are found guilty of:

-“Entering a public school bus while the door is open to load or unload students without lawful purpose while at a railroad grade crossing or after being forbidden from doing so by the bus driver in charge of the bus or an authorized school official.”

-“As an occupant of a public school bus, refusing to leave the bus after the bus driver in charge of the bus or authorized school official demands that they do so.”

-“Intentionally stopping, impeding, delaying or detaining any school bus from being operated for public school purposes with the intent to commit a crime.”

Ward said the state previously did not have a law dealing with trespassing on a school bus.

“Over the last two years, we have had over two dozen incidents of people going onto a school bus and getting into an altercation with students,” Ward said. “There needs to be a deterrent in place. Nobody should have to deal with what they did (in Dale County).”

If found guilty of illegally trespassing on a bus, a person could face up to one year in jail.

“I think this will be a well-received law. It’s something that’s definitely needed,” Ward said.

By NEAL WAGNER / City Editor The Alabama Department of Transportation will close portions of Alabama 119 between Pelham and... read more