Tradition kicks off with NCR Pro-Am 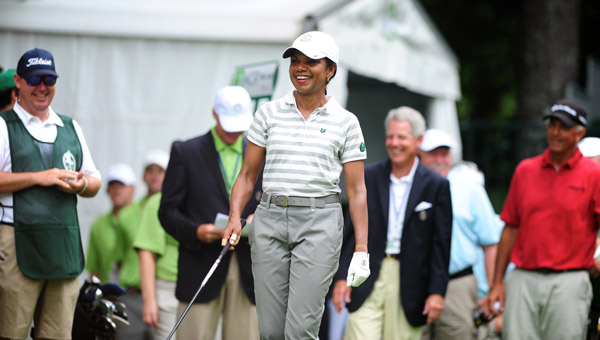 Former Secretary of State Condoleezza Rice smiles as she walks to tee off at the first hole of the Pro-Am round of the Regions Tradition at Shoal Creek on June 5. (Reporter Photo/Jon Goering)

The 2013 Regions Tradition got under way with the June 5 NCR Pro-Am tournament, featuring members of the PGA Champions’ Tour along with several amateur golfers with local connections.

A case of mistaken identity led to a humorous moment between Bussey and Jackson, as when the emcee for the opening tee began to announce Jackson’s many athletic credentials, Bussey ran out and began to look around in faux confusion when he realized it was not he who was being recognized.

Alabama Crimson Tide coach Nick Saban had yet to tee off, taking to the tee box at noon with golfer Rocco Mediate.

Check back at ShelbyCountyReporter.com for updates.