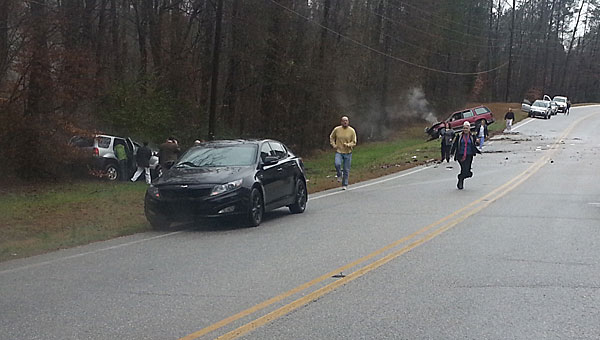 Witnesses rush to help the victims in a wreck on Shelby County 26 in Saginaw involving the silver Ford Escape, left, and the red Ford Explorer, center. The driver of the Ford Explorer has been charged with manslaughter and assault in the wreck. (Contributed)

A 20-year-old Alabaster man who was charged with manslaughter and first-degree assault in a January wreck on Shelby County 26 has pleaded not guilty to the charges.

Drew Alexander Graham pleaded not guilty and not guilty by reason of mental disease or defect to the charges on June 4, according to Shelby County Circuit Court Supervisor Jill Smitherman.

Graham was arrested on the charges and booked into the Shelby County Jail on Jan. 30, and currently is being held there on bonds totaling $100,000.

According to a complaint filed with his arrest warrant, Graham allegedly caused the wreck when he drove his vehicle into the wrong lane and collided head-on with Lewis’ vehicle.

Graham is scheduled to appear in court for a hearing on Sept. 3, according to court documents.