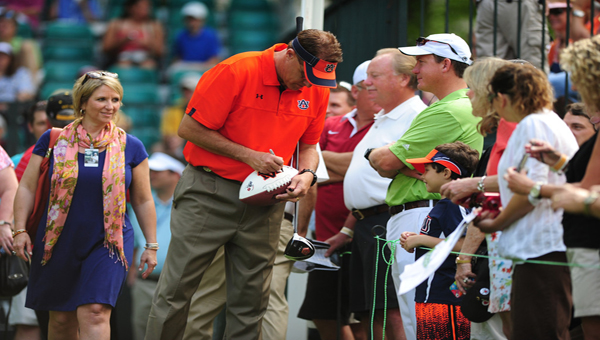 Auburn coach Gus Malzahn signs an autograph for a young fan at the NCR Pro-Am at Shoal Creek June 5.

What started out as a marvelous day for golf turned into a deluge, as storms ended the NCR Pro-Am at Shoal Creek early June 5.

The event, which puts celebrities with local ties together with PGA Champions Tour leaders as a way of kicking off the Regions Tradition tournament, started with first tee off at 6:50 a.m. on a crystal clear morning.

While the story was all about golf, football allegiances took precedent as several orange and blue-clad spectators crowded to watch Malzahn and Jackson take their tee shots.

Similarly, those in crimson came out in full-force when Alabama head coach Saban arrived for his 2 p.m. tee time. Unfortunately for Saban, it wasn’t meant to be as a storm rolled in right around the one o’clock hour, drenching the course and leading officials to call the event early. 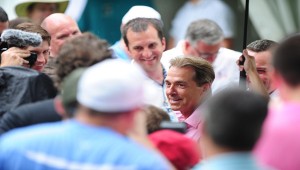 Because an entire group hadn’t even started yet, no score was given to any team.

While rained loomed over the afternoon, it didn’t dampen the excitement of the Champions Tour players as they focused on the Tradition.

“The course looks great,” said Bernhard Langer, the 2012 Tradition runner-up. “The greens are great, the bunkers are good, the rough is pretty consistent, so I don’t see any reason for complaints whatsoever. Whoever is involved with it should be congratulated.”

“The course is in great, great condition,” he said. “The rain, it’s unfortunate because it was nice and firm and playing quite fast. It will dry out as long as we get sunny skies going forward, it will get back to where it was and it’s pretty much perfect.”

Lehman said the thought of three wins in a row had crossed his mind, but was not his focal point.

“Of course everybody brings it up all the time,” he said. “I know my game is in a good place, but I’m not playing my very best. There’s guys who are playing better right now than me. If I can be patient and do the same game plan that I’ve had the last two years, which is just play the course, take what it gives you, take my chances when I can and hopefully make a few putts, hopefully on Sunday I’ll be right there.”

Langer said playing the course was crucial to success at Shoal Creek.

“It’s really a very testing golf course,” he said. “You’ve got to use pretty much every club in your bag.”

The Regions Tradition will start June 6 at 7:29 a.m. when the trio of Mark Mouland, Jeff Freeman and Joel Edwards tee off. Langer and Lehman will tee off at 9:30 a.m. and 9:41 a.m., respectively.

Tradition kicks off with NCR Pro-Am

Former Secretary of State Condoleezza Rice smiles as she walks to tee off at the first hole of the Pro-Am... read more