Sluman leads Tradition after first round 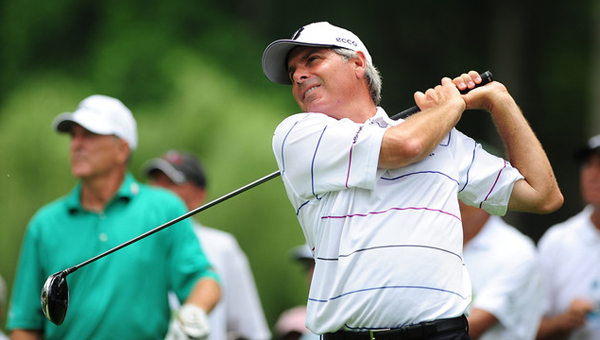 Fred Couples watches a drive in the opening round of the Regions Tradition at Shoal Creek.

It marks only the fourth time in his career Sluman has solely led a stroke-play match after the first day, the last being at the 2011 Constellation Energy Senior Players Championship.

To achieve his 7 under score, Sluman used eight birdies and a bogey, matching his best first round performance, also at the Constellation Energy Championship.

“I just really played solid golf,” he said. “Days like today it feels like it’s easy and then sometimes you go out the next day and it feels like there’s an alien that took over your body.  I hope that doesn’t happen to me tomorrow, but tomorrow’s another day.”

Couples said the rain played a factor in the round. His 66 held the clubhouse lead until Sluman supplanted him.

“The greens took a bit of water last night that you never saw,” he said. “If you were in the rough, you could get it in the green. If we don’t get any more rain, maybe by the weekend they’ll firm up a little bit. But it took a lot of rain, (and) obviously made the course play a little easier.”

Duffy Waldorf and Peter Senior are tied at 5 under, and sit two strokes back of the lead.