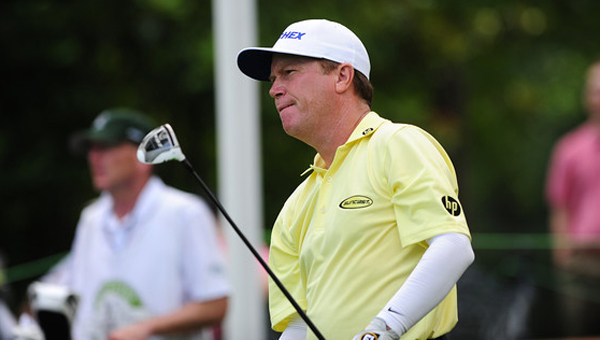 First round leader Jeff Sluman fell one stroke behind Duffy Waldorf overall after the second round of the Regions Tradition at Shoal Creek.

With a new day came a new face atop the leaderboard at the Regions Tradition at Shoal Creek June 7.

After a three-hour delay for inclement weather, Duffy Waldorf shot 4 under on the round to move to 9 under overall, taking the lead from Jeff Sluman heading into the clubhouse.

Waldorf, who is looking for his first Champions Tour victory in just his 14th start, said he felt he had a little more to learn about the course than most of the field, as it is his first appearance at Shoal Creek.

“Pretty much every tournament I come to is kind of a first time,” he said. “It’s kind of an adventure. Really the challenge is just finding the scoring tent a lot of times or not getting lost on the way to the course. It’s fun being a rookie out here.”

“It’s a beautiful course,” he said. “I liked it before I was playing well on it. The course is in good shape. It’s amazing how much rain we’ve gotten and they’ve still kept it very playable.”

If he were to win, he would be the fourth rookie to win on the Champions Tour in the last four tournaments.

Sluman shot 1 under for the round, falling one stroke back of Waldorf overall.

“Like I said yesterday, I hope to come out after an outstanding day hitting the ball,” he said. “I played pretty good today, made a few mistakes, didn’t make as many putts, obviously. I was very happy.”

The round also featured an appearance by model Katherine Webb to raise money for Alabama’s Children’s Hospital. Webb interacted with fans and took to Twitter to help raise awareness for the hospital’s patients and their families.

“On my way to Shoal Creek for the @RegionsTrad! We have a fun day planned, so come say hey!” Webb tweeted.

The third round of the Tradition will tee off at 7:20 a.m. Check back with ShelbyCountyReporter.com for more updates.

Sluman leads Tradition after first round

Fred Couples watches a drive in the opening round of the Regions Tradition at Shoal Creek. By DREW GRANTHUM /... read more