Weathers doing what he loves 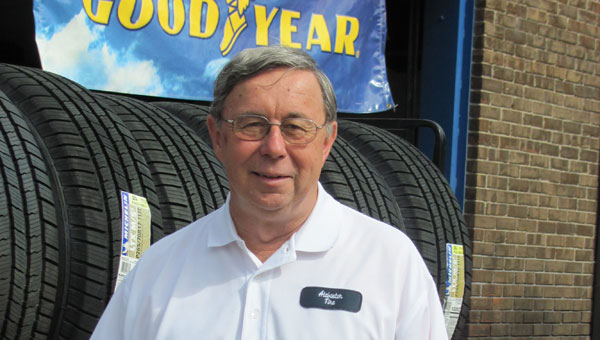 Wayne Weathers has been involved with what is now Alabaster Tire for many years. (Contributed)

Wayne Weathers knows he is the product of good folks because many older Shelby Countians remember his dad, Emory Weathers, who was a very popular jail deputy who loved to talk the Lord up to anyone willing to listen.

Wayne and brother Emory attended school in Montgomery. Weathers graduated from Sidney Lanier High School in July 1965. Having been a member of the ROTC in high school, Weathers was eager to get his military obligation behind him so he joined the National Guard’s 731st Maintenance Battalion while still in high school. Weathers served in the Guard until July 1972.

Weathers jokes that he couldn’t decide on a career choice so he “fooled around with selling racing tires.”

He and wife Cathy served several short tracks in Alabama and Tennessee. He met and became friends with a number of NASCAR drivers such as Bobby and Donnie Allison, Neil Bonnett, Red Farmer, Darrell Waldrip, Cale Yarborough, Hut Stricklin and even Marty Robbins, the country and western singer whose hobby was auto racing. These drivers purchased their tires at the track from Weathers.

A job at a Western Auto in Montgomery while taking classes actually started Weathers toward the tire industry. In the Spring of 1975 he moved to Pelham and met and married Cathy Gamel.

Weathers became involved in Alabaster youth sports where sons Bruce and Brad (by his first wife), then his and Cathys’ son, Corey, grew up playing youth football.

Weathers worked for the old Alabaster Auto Service for 18 years, left to work at Southern Rubber and then Big Ten Tire where he was a manager and district manager over 12 stores.

“I tried retirement for about a month and found out it wasn’t for me,” Weathers said.

Now back at Alabaster Tire with old friends, doing the job he loves best and taking care of his customers is the life Weathers truly loves.