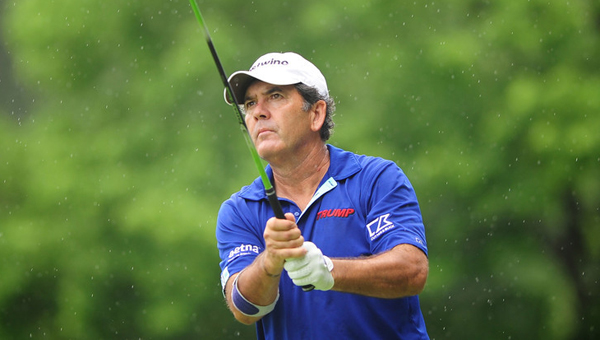 For the first time since moving to Shoal Creek, the Regions Tradition has a new winner.

South African native David Frost shot 4 under for the round and 16 under overall to take the 2013 Tradition, beating Fred Couples by one stroke.

It marks the second victory on the season, and first major championship for Frost, who not only battled Couples down the stretch, but Mother Nature as well. The final round tee time was moved up to 7:30 a.m. to avoid the inclement weather approaching the Birmingham area.

“I obviously am delighted to have finally won a major tournament,” he said. “I didn’t think it would be easy, and it wasn’t easy, especially with the rain delay.”

Play was halted for more than an hour due to a thunderstorm with the pairing of Frost, Couples and Morris Hatalsky on the 15th hole. Intermittent rain fell during the rest of the round, with a deluge coming just moments after Frost sank the winning putt.

Frost said the break gave him time to take in what lay ahead.

“We came in for the break, (and) I sat there and said to myself ‘it’s not going to be easy,’” he said. “‘(Couples) has nothing to lose. He’s going to go out there and hit the shots and fire at the pins, and I’ve got to accept it and be up to the challenge.”

Couples appeared to be closing on Frost on the back nine after two straight birdies on holes 15 and 16 to move within one stroke. A shot that went wide of the green on 17 forced him to save for par, and a putt for birdie to tie on 18 came up short. Frost then double-putted for par, securing the victory.

“I hit a terrible shot on 17,” Couples said. “I just made a bad swing, bad judgment. I mean I was a little jumpy on the shot. And it was not an easy shot.”

He went on to compliment Frost’s effort.

“I gave him everything pretty much everything I had,” he said. “I drove it pretty well, but he was just better the whole day.”

The victory marked Frost’s fifth career Champions Tour victory in his 87th start, earning him $335,000 and 660 points in the Charles Schwab Cup points chase. He takes over the lead in standings by 300 over Berhard Langer.

By DREW GRANTHUM / Sports Writer After three rounds, yet another player found himself atop the leaderboard at the Regions... read more