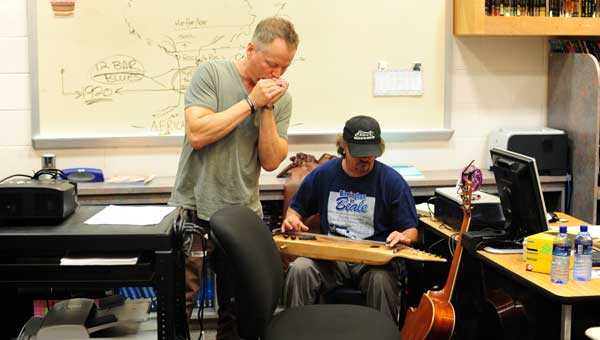 Bruce Andrews and George Dudley, members of 2Blu and the Lucky Stiffs, perform and talk about music with the kids at the Shelby County Juvenile Detention Facility on June 4. (Reporter Photo/Jon Goering)

COLUMBIANA – Musical notes escape from behind a heavy locked door, filtering down an austere hallway. Rounding a corner, the music becomes louder, in whimsical contrast to its somber surroundings

“Now to get this sound you need to pucker up like you’re gonna kiss your grandma,” explains the T-shirted, blue jean clad instructor, who obviously can play one mean harmonica, though he admits the instrument sometimes get little respect.

Not so on this day as a group of about 30 teenagers, ranging in age from 13 to 18 years old, each clutch a harmonica and bring it in unison up to their mouths.

They look like any group of typical teens gathered for an impromptu jam session, but these young people aren’t typical. Assembled in casually arranged chairs in the crowded room, they are all dressed exactly alike, grey sweatshirts, khaki pants, white socks and brown sandals. They are meeting behind a locked door; the kind that requires voice activation, and must be opened by remote.

These young musicians are all inmates at the Shelby County Juvenile Detention Center. They’re attending a first of its kind class at the facility called Roots Blues, a therapy of sorts for kids at a cross roads. The program is sponsored by the Shelby County Arts Council (SCAC) and funded through a license tag program appropriated by the Alabama State Legislature to help fund the arts.

Bruce Andrews and George Dudley, local musicians of the band 2 Blu and the Lucky Stiffs, are teaching the youngsters. Andrews said he approached the SCAC with the idea for this program over two years ago.

“We just started thinking, ‘Wouldn’t it be cool to get this in front of kids who are more at a cross roads, who are at a kind of place they can either turn their lives around or not?’ I was thinking, ‘Wow, these kids could really benefit from something like this,’” he said.

Andrews, with tongue firmly in cheek sees only one minor road block.

“Once they get over ‘the uncoolness of the harmonica, this little tin sandwich that I’m embarrassed to hold’, they experience a break-through, a sense of accomplishment.”

Andrews sees a parallel between people steeped in the roots of American music and the kids sitting in his classroom.

“All of those early people with influence on our music today figured out really simple lasting ways to say something profound and it affected society. Maybe I’m being optimistic, but maybe there is in here a musician, a preacher or poet,” he said. “Creativity and imagination don’t cost anything. How many very creative people came from nothing? Every one of these kids could catch the creative spark and go with it. Unfortunately, for me I don’t have anything to offer but a harmonica and a guitar. I don’t know, but what we’re doing just feels right.”

Oh, and about that harmonica. It’s theirs to keep. Each kid gets to take it home when he or she leaves the detention center. Program coordinators don’t expect a single one to be left behind.