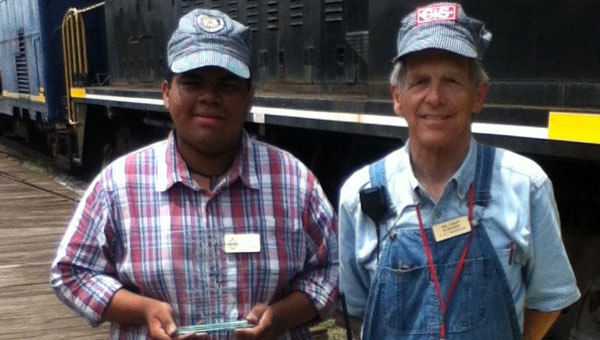 Bailey Reynolds, left, a car host and assistant engineer at the Heart of Dixie Railroad museum, holds the plaque awarded to him for his service as a student volunteer. Standing with him, beside a train on the museum yard, is Neil Smart, main engineer at the museum. (contributed)

When he was a baby, sixteen-year-old, his mother Sherry Reynolds would take him to work with her at her beauty shop, which was located at that time beside the railroad tracks in Chelsea.

When they heard a train coming, his grandfather Jimmy Bailey would run across the road from his Seed and Feed Store, get him and take him outside to watch the train go by.

After he was older, his mother and grandparents took him to see trains in other places, including the Heart of Dixie Railroad museum in Calera.

He and his grandmother Judy Bailey often rode around the county on Saturday mornings to look at trains and train stations. “And we would go to the Whistle Stop Café at Irondale, set in there by the railroad tracks and watch the trains,” he said.

There was also a road running parallel with some tracks, where they liked to go when they knew it was time for a train to come through, he said. They would sit and wait for the train to get there, then drive down the road along side it, “racing” it.

Around three years ago, Bailey was privileged to actually begin working with trains as a volunteer at the Heart of Dixie Railroad museum.

Two Saturdays a month, he acts as a host, talking with visitors, showing them through train cars and the inside museum, punching tickets, switching and even serving as assistant engineer.

He helps take kids to the pumpkin patch at Halloween and on the Christmas train in December.

“When I get 18 I can go to school to start working for CSX Transportation,” he said, “And training to become an engineer.”

At a February banquet, Bailey was presented with a plaque as a volunteer “Student Participant,” in appreciation of time he spent at the museum in 2012, “learning the various aspects of tourist train operation and helping out wherever (he) could.”

Shelba Nivens is a community columnist for the city of Chelsea and can be reached at Shelbasn@juno.com.