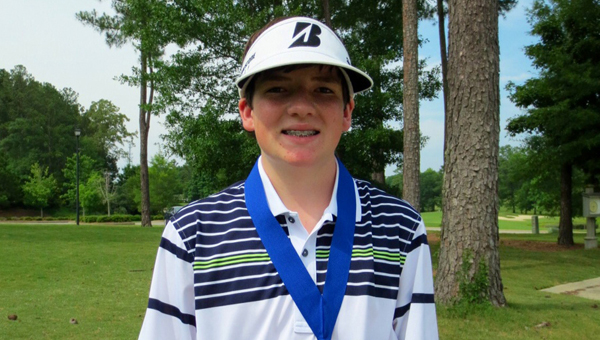 NORTH SHELBY — The USKG Birmingham Summer Golf Tour kicked off on June 4 at Eagle Point golf course, and Alabaster’s Jackson Singletary won the opening tournament and plans to play the remainder of the tour schedule.

What makes Singletary’s win so impressive is what he has to overcome each time he steps on the golf course.

In July 2010, Singletary had a dirt bike accident that forever altered his life.

“He had been riding since he was 4,” said his mother, Meg. “We didn’t think anything of it.”

Meg described it as “a freak accident,” but noticed something was different about Jackson after the wreck.

He was perfectly fine (before the wreck),” she said. “He came back a different kid. He pretty much just laid on the floor.”

Jackson would refuse to listen to the radio on car rides, and couldn’t seem to shake a headache. Things he once enjoyed, he couldn’t take anymore.

“We used to have season tickets to Auburn (football),” Meg said. “We’d have to leave after the first quarter (because of the noise).”

He was taken to a neurologist, who diagnosed him with a concussion. While Jackson can’t remember the wreck, he carries the damage from it daily. He was left with permanent nerve damage and a constant headache.

He was prescribed Zimbalta to help with the headaches, but they couldn’t take the pain away. Neither could trips to a chiropractor. It seemed nothing they tried worked. He was forced to give up baseball because the noise was too much to handle.

So in an effort to help him be active, his father took him to the driving range, and Jackson was immediately hooked. The peace of the golf course allowed him to be competitive within the confines of his pain.

“It was the first thing he showed interest in since the accident,” Meg said. “He’s learned to deal with the pain. That’s where he finds peace.”

Meg said both she and Jackson have found peace with his scars.