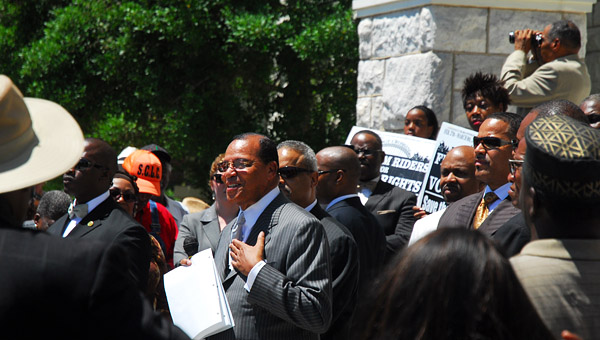 Minister Louis Farrakhan speaks to a crowd at a rally in front of the Shelby County Courthouse on June 14. (Reporter Photo/Jon Goering)

COLUMBIANA — Clad in a charcoal gray pin-striped suit, Nation of Islam leader Louis Farrakhan stood in front of the Shelby County Courthouse and spoke out in support of Section 5 of the Voting Rights Act.

In a case currently before the United States Supreme Court, Shelby County is challenging two sections, 4b and 5, of the Voting Rights Act.

The two sections require Shelby County and cities in 16 other states with histories of racial discrimination to obtain preclearance from the Department of Justice before making any changes to voting procedure or electoral maps.

That Supreme Court decision is expected by the end of the month.

Farrakhan joined prominent Alabama politicians such as Tuskegee Mayor Johnny Ford and state Sen. Hank Sanders, D-Selma, on a June 14 pilgrimage to support the two sections, going from Birmingham to Montgomery with stops in Columbiana and Selma along the way.

“Black people in this country, you know we have paid a horrible price in Alabama, Mississippi and Georgia to be where we are today,” said Farrakhan as he spoke to dozens of supporters.

Farrakhan railed against the inequality he said he still sees in America, speaking first about how this nation was built on the backs of black people.

“There is no advancement that white Americans made that we were not a part of,” Farrakhan said to cheers and whistles. “We died in every battle that America has had.”

He urged the U.S. Supreme Court to uphold Sections 4b and 5 of the Voting Rights Act, saying, “a court is a great place only if justice will flow down from the court.”

“Here we are, back talking about voting rights, which were supposedly given to us with the 15th Amendment,” Farrakhan said. “What good is a law if there is no enforcement for that law? If this law (the Voting Rights Act) is not enforced, then it’s no law at all. We really need to drop this case and let justice be done.”

Attendee Betty Boynton of Selma said riding along with the pilgrimage was simply a continuation of her lifelong fight for civil rights. At 15 years of age, she marched in the Selma to Montgomery March in 1965 along with Martin Luther King Jr., she said, and she comes “from a long history” of demanding equal rights.

“I didn’t go across that bridge in 1965 for nothing, to take my rights away from me,” she said. “I’m a foot soldier. I’m still on the battlefield.”

Jacob Guyton, a junior at the University of Montevallo, said the two sections of the Voting Rights Act are essential to civil rights for black people.

“You take away voting rights, you kind of take away our voice. If you don’t have a say-so, you can’t really consider yourself a citizen,” Guyton said. “Without our right to vote or our right to speak out, to decide who is our leader is or how it affects our community, it kind of takes away our rights.

Shelby County Commissioner Corley Ellis watched the rally from a building on Main Street and said he was “impressed” with it.

“This is a huge topic,” he said. “Both sides need to be heard and deserve to be heard.”

Drew Granthum and Katie McDowell contributed to this story.

Decision on Voting Rights Act coming by end of the month