Chelsea parents speak out against being rezoned for Pelham schools 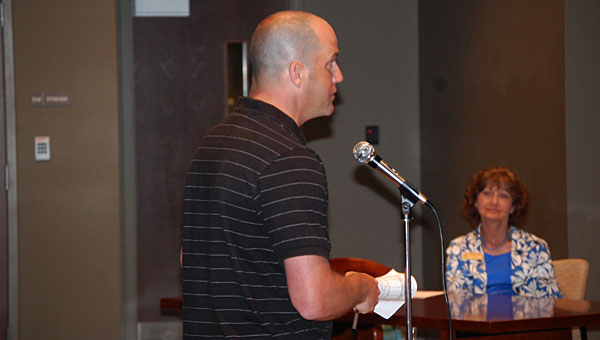 Jason Rhoads, a resident of the Bent Creek subdivision, speaks against possibly being rezoned from Chelsea schools to Pelham schools during a June 17 public hearing at the Pelham Municipal Courtroom. (Reporter Photo/Neal Wagner)

A multitude of Pelham residents currently zoned for Chelsea schools offered sometimes-heated opposition to being rezoned to Pelham schools if Pelham breaks away from the Shelby County School System to form its own city district during a June 17 public hearing.

The nearly three-hour public hearing in the Pelham Municipal Courtroom featured about 25 speakers – the vast majority of whom are currently zoned for Chelsea schools.

Pelham Councilman Ron Scott, who served as moderator of the hearing, frequently called the event to order as members of the standing-room-only crowd of more than 300 applauded and shouted comments.

Most of the speakers voiced concerns over possibly being rezoned from Chelsea schools to Pelham schools if the city breaks away from the Shelby County School System in the future. About 220 students currently live in Pelham but are zoned for Chelsea schools.

Most speakers said they view Chelsea as their community, and voiced concerns about the long distance from their homes to Pelham schools.

“When I bought my home, it stated Pelham services and it said Chelsea schools. That’s why I bought my house,” said Brittney Ellsberry, a resident of the Bent Creek subdivision. “My children will spend an exorbitant amount of time getting to school (if rezoned for Pelham schools).”

Pelham City Council President Rick Hayes said if the city decides to separate from county schools, the council will attempt to work with the Shelby County School Board to allow students currently zoned for Chelsea to still attend Chelsea schools.

“We truly can be the Chelsea neighborhoods’ best ally in this process. We will push and fight and serve on your behalf,” Hayes said, noting Pelham students are “not statutorily prohibited from attending county schools” if Pelham separates from the county school system.

However, the Shelby County Board of Education would have to agree to allow Pelham students to attend Chelsea schools if Pelham breaks away, Hayes said.

“If the county says no, the state superintendent can overrule that if it’s in the best interest of the students,” Hayes said.

Several speakers said they were uncomfortable without assurance they would remain zoned for Chelsea schools in the future.

“The law states Shelby County has the ability to accept us or reject us, and they’ve said they will reject us,” said Jason Rhoads, also a resident of Bent Creek. “You say you would recommend we be able to stay in Shelby County. What kind of weight does that carry?”

Councilwoman Karyl Rice encouraged those concerned with being rezoned to Pelham schools to petition to de-annex from Pelham.

“If I were talking with you, not necessarily as a member of this City Council, I would say I would be getting my petitions ready to de-annex out of the city,” Rice said. “That would solve your problem. That would remove you from what we are trying to do for our schools.”

The Alabaster Board of Education will help fund police officers at each of the city’s schools during the upcoming fiscal... read more