Helena scouts ‘out of harm’s way’ near N.M. wildfire 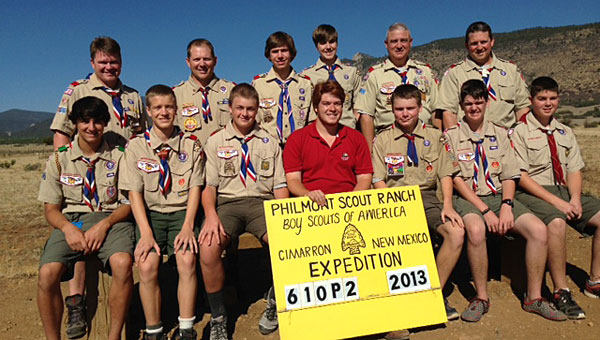 Members of Helena’s Boy Scout Troop 2 are safe after they were evacuated from the southern end of a New Mexico ranch because of a wildfire. (Contributed/Troop 2)

Members of Helena’s Boy Scout Troop 2 were rerouted during a camping excursion in New Mexico, and are “out of harm’s way” after lightning started a wildfire near their location late last week.

Troop 2 is on a camping trip to Philmont Scout Ranch in Cimarron, N.M., and was “several days into their backpacking trip” when lightning started a wildfire near the park’s southern boundary, according to Troop 2 parent Linda Wurstner, whose son is on the trip.

Though the fire is not in the park’s boundaries, Philmont Ranch officials evacuated all scouts from the southern end of the ranch as a safety precaution.

“Our guys’ trek has been rerouted from the South Country (Apache Springs, Fish Camp, Abreau, Trail Peak) due a 1,000-acre fire three miles south of the ranch’s southern boundary,” read an email sent to Troop 2 parents by former Troop 2 scoutmaster Larry Faulkner. “This would have placed our guys in harms way, and they were sent from Mt. Phillips back toward the North and Central Country.

“I do not have specifics on them other than what a friend at the Ranch shared – which is they are out of harm’s way,” Faulkner wrote.

According to information on the Philmont Ranch website, the fire started on June 13, had grown to about 1,268 acres and was about 10 percent contained as of June 16.

Emergency responders are placing a “high priority” on ensuring the fire does not cross into the ranch’s southern border, read the website.

“Philmont is continuing to monitor the fire and smoke, and is working with local firefighting authorities to provide support where needed,” read the website.

Since being evacuated from the southern end of the property, Troop 2 has been relocated to another area of Philmont Ranch to continue its hiking expedition.

“Crews will have their itineraries modified, allowing them to continue hiking and programs in other parts of the Ranch,” read the website.

By NEAL WAGNER / City Editor The Alabama Department of Transportation will continue road closures on Alabama 119 this week... read more