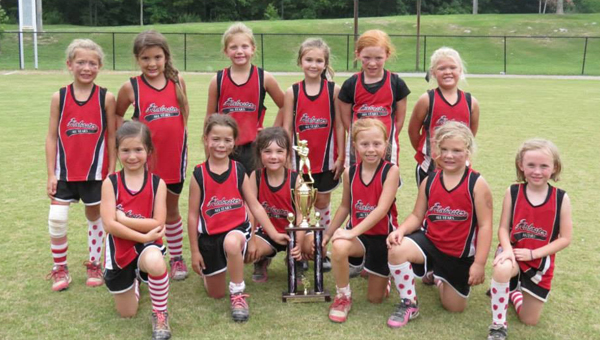 The team opened up the tournament with a win on June 14, taking down Moody, 26-12. The second game of the evening saw more of the same, as Alabaster defeated Vestavia Hills, 24-7.

Alabaster 6U experienced a bump in the road on June 15, as they fell in the first game of the day to Hueytown, 19-17. It marked the first time the team had lost in all of its all-star games played so far.

The next game saw Alabaster 6U respond in strong fashion, taking down McCalla, 22-8. The win secured a No. 1 seed in the tournament for Alabaster.  Alabaster 6U followed that up with a 20-11 performance against Helena.

A heat advisory forced the postponement for the rest of the June 15 games to June 16. The first matchup was a semifinal game against Hueytown. This time, there was a different result, as Alabaster won 18-13.

From there, the team moved into a final round matchup with Hoover. It was a close matchup early, as Hoover held Alabaster to a 3-1 lead, but Alabaster notched four runs in the third inning, making it 7-1.

Alabaster never looked back, taking down Hoover by a score of 14-3, capturing the championship.

The win not only gave Alabaster 6U bragging rights, it clinched the No. 1 seed in the Area tournament, held at Liberty Park June 21-23. A win or top-4 place in the area tournament will clinch a spot in the state tournament.