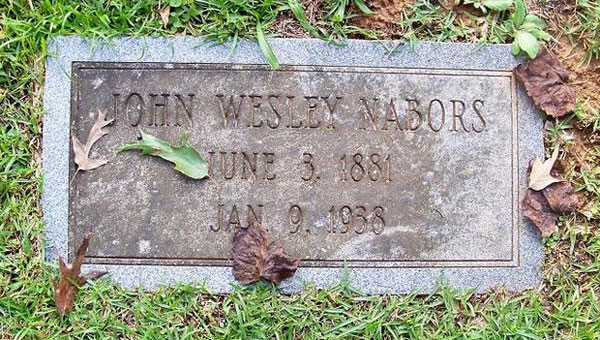 Alabaster police officer Dewey Webb is collecting information on the city’s past law enforcement officers, including John Wesley Nabors, who was killed in the line of duty in 1938. (Contributed)

Alabaster Police Department officer Dewey Webb has made his fair share of phone calls over the past several months.

“I’ve made a lot of phone calls,” Webb said with a laugh. “I’m trying to track down as much information as I can and go back as far as I can go.”

For about six months, Webb has been searching for and compiling information on all of Alabaster’s police chiefs and night watchmen. Before Alabaster was incorporated in the early 1950s, the night watchmen served as the city’s law enforcement agency.

During his research, Webb compiled information on one of the city’s greatest law enforcement tragedies. On Jan. 9, 1938, 56-year-old night watchman John Wesley Nabors died in a Birmingham hospital from gunshot wounds suffered when he was robbed by two men in Alabaster a few days earlier.

“He was on duty when he was robbed. He was the first officer in Alabaster killed in the line of duty,” Webb said. “I was able to find out where he is buried and everything.”

Webb is compiling the historical information to one day display on the walls of the Alabaster Police Department. Once completed, the display will include detailed biographies and photos of every police chief and night watchman, Webb said.

Webb, who has been an Alabaster officer for the past six years, also completed a similar project while he was an officer in Montevallo.

“I don’t want to be put up on a pedestal or anything, I’m just doing it for the department,” Webb said, noting he has been working on the project during his free time. “I just want to do it for the people of Shelby County, and to honor these men and women.”

On June 19, Webb said he had gathered information on “almost all” of the Alabaster chiefs and night watchmen, but said he was still tracking down information on a few men.

Anyone with information on the night watchman program or Alabaster’s past police officers are encouraged to contact Webb at the police department at 663-7401.