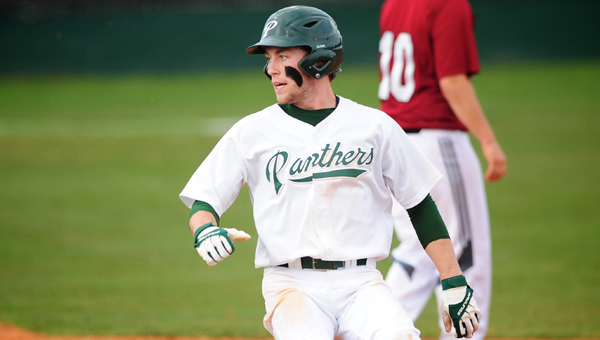 The way that the 2013 Pelham Panthers Baseball team went through the playoffs on the road to capturing the AHSAA Class 6A State Championship trophy was almost machine-like: sound, efficient and precise.

It’s also safe to say that outfielder and 2013 Shelby County Reporter All-County Player of the Year Fletcher Johnson was a driving force behind the machine. According to Coach Sean Anderson, whenever a boost was needed, Johnson was there to provide it.

“He’s the one that got us going,” he said. “A single usually turned into a double. The ball goes up and 99.9 percent of the time, anything in left center or right center, he got it.”

Yet while Johnson stole 20 bases on the year, there are two in particular that stand out: the two he took in the first game of the state championship series that led to Panther runs, including the one that won the game.

Johnson’s stats are impressive, yes, but his ability to change the outcome of a game is what made him invaluable to the Panthers’ success this year —and what won him the Player of the Year title.

“When you lead off the game with a home run, it sets the tone,” Anderson said. “(When he stepped to the plate,) you knew something good was going to happen.”

One of the characteristics that Anderson said couldn’t be measured in numerical value is Johnson’s competitive nature.

He will be attending the University of Tennessee-Martin on an academic scholarship and intends to major in engineering.

Anderson said he expects Johnson to continue his success on the next level.

“Nothing was good enough,” he said. “He always kept getting better.”