Montevallo Golf Club and Boys and Girls Club team up 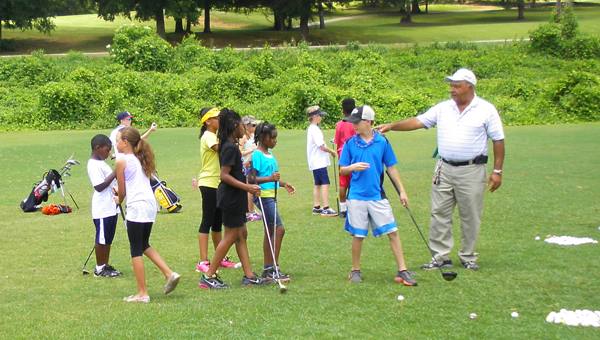 The Montevallo Golf Club and the Boys and Girls Club are working together in a partnership to broaden students’ athletic horizons, as the MGC hosts a session with the Club’s summer camp participants to teach them the fundamentals of golf.

“Frieda is an acquaintance of mine,” he said. “I just asked her if she’d be interested.”

Shivers agreed, and the partnership began.

Each Wednesday during the course of the summer camp’s tenure, the students come out to the course from 12:30-2 p.m. to learn from Davis and the other golf professionals at MGC.

Davis said anywhere from 20-30 students attend, and all clubs and balls are furnished by the MGC.

While the sessions may become more detailed as the summer progresses, Davis said the plan was to keep it simple to start with.

“We work on the basics golf swing,” he said. “Right now we just want to have them hit three-to-four balls each.”

Davis said his hope was that those who attend the sessions will learn to love the game.