Hamrick ‘making a difference’ on and off field 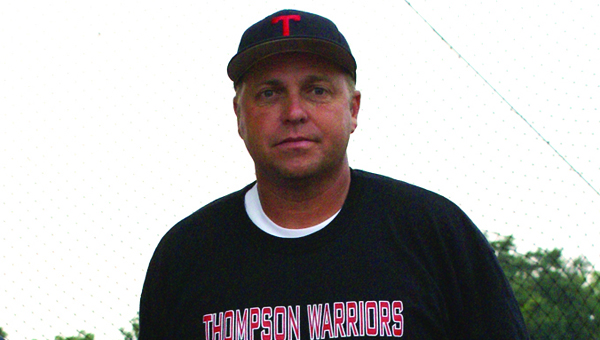 Whether fair or not, coaches are almost always remembered for leading their teams as opposed to the lives they lead. Rarely is a coach’s legacy defined by what they do off the field.

One of the few exceptions happened June 20, as Thompson baseball coach Pat Hamrick was awarded the AHSAA’s Making a Difference Award.

The award is presented yearly to six individuals involved with the AHSAA who have “made an impact as (an) exemplary role model” by the Athletic Directors and Coaches Association.

“(He)’s a great example of what I’m hoping for as a school leader,” Steele said.

Hamrick’s involvement with Carden, who has cerebral palsy and uses a wheelchair, goes back to helping Carden achieve a dream his junior year in 2010. Hamrick, with assistance from state Rep. Cam Ward, R-Alabaster, and then-Alabaster City Council member Jim McClain, was able to secure funding to send Carden, a huge NASCAR fan, to Talladega.

“Josh is a special person,” Hamrick said. “He has a lot of things he could be down about, but he always has a positive outlook on life. Any way I could help him. It just started off taking him to the race, him and his Paw-Paw.”

Carden was able to attend, sat in the pace car and even met his racing hero, Kurt Busch. It was a high point before tragedy struck.

In December 2010, Carden’s grandfather (who was also his primary caregiver) was killed when he was hit by car while walking across the road to pick Josh up from the bus.

When Hamrick heard the news, he set out to try to ensure Carden got as painless a Christmas as possible.

“We just really wanted to give him a nice Christmas,” he said. “Before you know, it just snowballed into something else. I wanted to do something to try to get him to hopefully not think about the tragedy that just happened. As much as he loved NASCAR, the first thing I thought about was a flat screen television with surround sound. Something that he could use and enjoy.”

What started as help to get Carden a TV to watch his beloved races ended up being a much bigger deal than Hamrick imagined. Once his request to raise $1,000 to help provide the family with a TV spread, all of Thompson High jumped on board.

“That’s where it all started,” he said. “Jeff Atkins, who used to be the assistant principal here, helped out. He wanted to shave his beard for money during the teacher versus student basketball game. The next thing you know, right before Christmas, we had over $12,000 for Josh.”

Hamrick and others took the money raised and purchased additional Christmas gifts for the family, as well as helping to pay off their some of their expenses.

The attention drew an outside company in to the project. The Josh Carden Project, founded by Jeff Brooks, led to Carden and his grandmother having a brand new house that was better suited to his needs being built,

Hamrick’s endeavors led Steele to nominate him for the award. Steele said Hamrick’s success on the field, such as leading Thompson to the No. 1 ranking in 6A baseball for a good portion of the season, was impressive, but his off-the-field activities as a special education teacher and other work such as volunteering in the cafeteria were even more admirable.

“He’ll do whatever is needed around campus without being asked,” Steele said. “He’s the definition of a servant-leader. Winning a state championship is a good thing, but when you have the opportunity to impact someone’s life, that lasts longer than a state championship. He’s leaving a great legacy.”