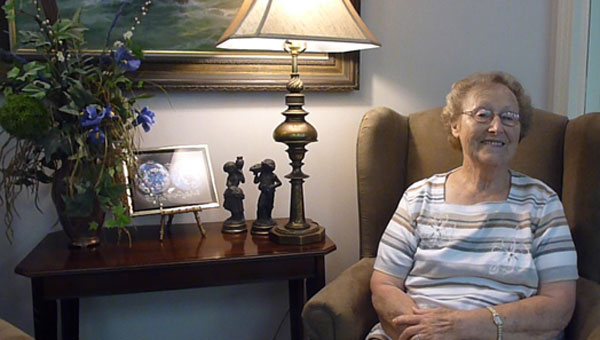 Barbara Moore is a beloved wife of 57 years, mother of three daughters, grandmother of four, and great grandmother of five. She also helps take care of her 95-year-old father in a nursing home.

With all that on her plate, Moore decided she wanted to serve the community she loves so much and run for the Ward 2 seat for the Columbiana City Council.

She won her first election and began her first term in the fall of 2012.

Moore was raised in Blount County and married Charles Moore, son of Arthur and Edna Moore of Columbiana. Charles retired from the Navy and the Moores moved back to his hometown. Barbara worked at the State of Alabama Food Stamp Division, where Gerie Kelley was her supervisor until she retired.

The Moores attend the Columbiana Church of the Nazarene where Barbara volunteers in the Food Bank. They also enjoy camping in their motorhome.

When asked why she wanted to run for the city council, Moore said she wanted to see her district improve. Her husband drove her to every house or apartment in her ward so she could visit personally with every voter. Moore had flyers and cards printed for name recognition so that her constitutes would remember her on the ballot.

“I told my constituents that I would work for them if you tell me what you want,” said Moore. “I did not promise them anything, but that I would bring their concerns before the council. I would be the voice for Ward 2.”

Moore says her main goals are to bring jobs to the community, cleaning up and improving the city’s appearance, and building more rooftops for permanent residents to come to Columbiana. She is especially concerned about improving the appearance of her ward, which encompasses Old Highway 25 and Alabama 70 coming into Columbiana. Police Chief Lamar Vick has been extremely helpful with some issues that have been brought to her attention.

“I will accomplish what I can,” said Moore. “I promise to keep Ward 2 on the minds of the Council.”