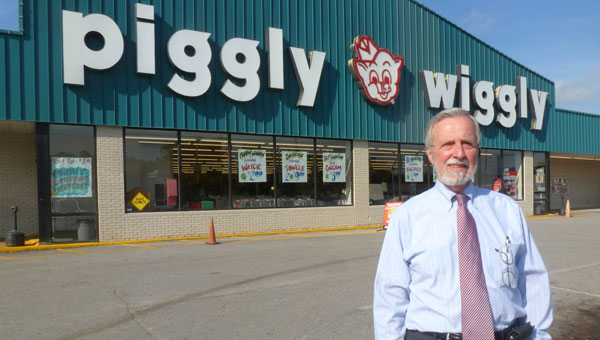 Charles Culotta, owner of the Piggly Wiggly of Columbiana, has been named the grand marshal of the Liberty Day Parade by Mayor Stancil Handley.

“I have been a doctor in Columbiana for many years,” said Handley. “I know of no other man who has worked so tirelessly behind the scenes to give back to this community. He has faithfully helped out when needed. No greater example of this was during the catastrophic Summer Classic fire. He just opened up his store and gave truckloads of food, water, and much needed supplies to the firemen, police, emergency workers and whoever else needed help. Whatever was needed, it was there; no questions asked. I want this community to be aware of this great citizen and appreciate him and Piggly Wiggly for the good that he and his store have given back to our community. As a businessman, I feel you must give back to the community that supports you. Mr. Culotta has gone far and beyond that for Columbiana and I want people to know that. He is a humble man who does not like the limelight and I am thrilled he accepted to be the first Liberty Day Parade grand marshal of my administration.”

Today brothers Vincent, Sam and Charles Culotta own “The Pig” in Columbiana as well as two stores in Sylacauga. Charles’ son in law, Wayne Johnsey, helps manage the Columbiana store.

“I have had the privilege of knowing Charles for 26 years,” said Johnsey. “He is, without a doubt, one of the finest men that I have even known. His humble spirit, kindness, generosity, and love for both his family and the Lord are all qualities that have made him a seminal influence in my life and the lives of countless others.”

“I enjoy work,” said Culotta. “I try to take care of my wonderful customers and am blessed to have the best employees, some who have been with me for over 30 years. I try to treat everyone fair. But the bottom line is that God built this business. I believe to him, who has been given much, he has to give back. It is just part of my faith.”