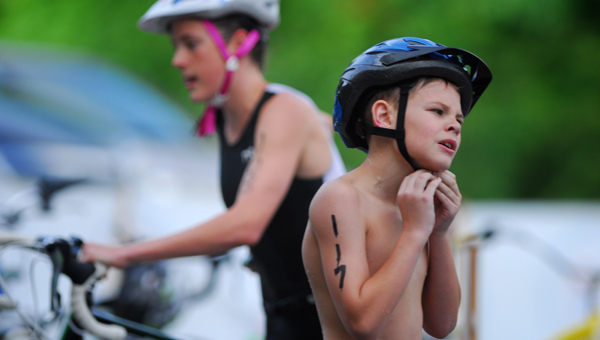 A racer buckles his helmet in transition from swim to bike at the Alabama Sports Festival Youth Traithlon held at Oak Mountain State Park June 23.

Shelby County played host to the 31st Alabama Sports Festival June 21-23, as what is essentially the Olympics for the state of Alabama used several facilities within the county to hold their events.

The Festival brings the best athletes from across the state in Olympic-style competitions to the Birmingham area. Events include soccer, rugby and wrestling, among others.

In the rugby championships, the Birmingham Vulcans Rugby Club took down the University of Alabama rugby club team, 34-5, June 22 at Thompson High School’s football practice fields. The match saw the Vulcans keep the ball in the Alabama zone. Per Olympic rules, the matches were kept to two 14-minute halves, and the Vulcans used every second, scoring early and often.

After a Birmingham score on the opening possession, Vulcan player Brad Kilpatrick scooped up an Alabama fumble at midfield to score again. It was an indication of the rest of the game, as Alabama never mounted a challenge, staying off the board until the game was already out of reach.

“It’s fun, we’ve done this for the third year in a row,” said Vulcans coach Tommy Babakitis. “The guys put out a great amount of effort to defend our title.”

Babakitis said he felt the team’s chemistry was the difference maker.

“We have a good time,” he said.  “Our experience playing together, out there on the field, we’re in support of each other the whole time. We outwork everybody.”

The youth triathlon took place June 23 at Oak Mountain State Park. The race saw 37 of the state’s best 15 and under runners tackle swimming, biking and running all at once. The triathlon was split into age groups 7-8, 9-10, 11-12 and 13-15. Each class had varying distances for the parts of the triathlon.

The racers and organizers were quick to compliment Oak Mountain.

“It’s nice,” said the 1-12-year-old winner Robert “RC” Stewart, from Wetumpka. “You get to run on the lake. You get tired, but you look at the views and it takes your mind off things.”

“Oak Mountain is the premier place to host,” he said. “The roads and bike trails lend themselves to (triathlons).”

Calera 8U finishes third in tourney