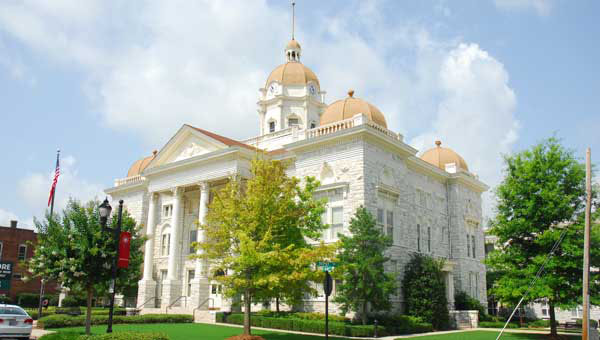 The U.S. Supreme Court overturned a key section of the Voting Rights Act, ruling in favor of Shelby County in the Shelby v. Holder case. Pictured is the Shelby County Courthouse. (Photo by Jon Goering/For the Reporter.)

In a landmark decision on June 25, the U.S. Supreme Court overturned a key section of the Voting Rights Act, ruling in favor of Shelby County in the Shelby v. Holder case.

In the case, argued on Feb. 27 of this year, Shelby County challenged two sections, 4 and 5, of the Voting Rights Act.

The Supreme Court decision overturns Section 4, which defines the “covered jurisdictions,” which include Shelby County and cities in 16 other states with histories of racial discrimination.

Section 5 requires those jurisdictions to obtain preclearance from the Department of Justice before making any changes to voting procedure or electoral maps.

According to the decision, the court held that Section 4 of the Voting Rights Act, passed in 1965, is unconstitutional “in light of current conditions.” The section has been reauthorized several times since its passage, most recently in 2006.

The court did not invalidate Section 5, but said Congress would have to find an up-to-date way to decide who should have to obtain preclearance if the section is to remain in effect.

“Our country has changed, and while any racial discrimination in voting is too much, Congress must ensure that the legislation it passes to remedy that problem speaks to current conditions,” the opinion states.

Shelby County Attorney Butch Ellis said he was pleased with the ruling.

“I’m elated that the court recognized that we are a dynamic, changing county, that the last 50 years have brought about changes that no longer justify the intense scrutiny of the federal government of everything we do,” he said.

“Section 2, which was always intended to be the permanent provision of the Voting Rights Act, will be there to protect against discrimination,” he said.

Shelby County Manager Alex Dudchock said he felt Shelby County had a “strong” position from the beginning of the lawsuit.

“I felt like we had a very good position because of the clear advancement our county and other counties had in ensuring voting practices in all other forms of local governments, in being reasonable and respectful for all people and in the resulting actions clearly not indicating any discriminatory practices,” he said.

“Even me as a layperson, I felt like I was given the indication that our position was strong, and that the section should not have been continued for all these years, and that they should have gone ahead and amended that and removed what we thought was unconstitutional. And that’s what happened,” he added.

Pastor Kenneth Dukes, a Montevallo resident who helped organize a June 22 rally in support of Sections 4 and 5 of the Voting Rights Act, said he was disappointed in the decision.

“I’m disappointed that we have to face this situation,” he said. “It kind of frightens you to see what’s next.”

Dukes said there are still plans to organize a county chapter of the NAACP, and he hopes the county will work with the group when making changes to voting practices.

“Shelby County seems to have good people,” he said. “I hope that we will come together and work as a team.”

He also said if the NAACP sees discriminatory voting practices, it will pursue all legal avenues.

By AMY JONES / Associate Editor In a landmark decision, the Supreme Court ruled in favor of Shelby County in... read more