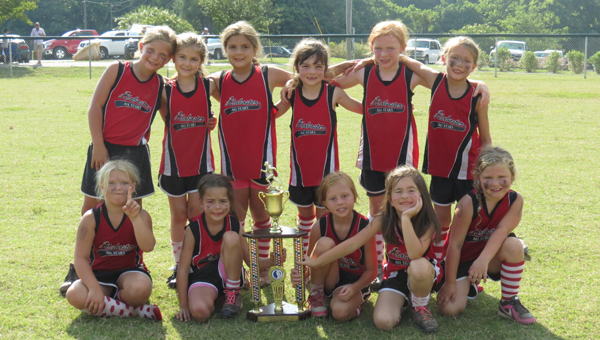 The Alabaster 6U Girls Softball All Stars finished second in the USSSA Area Championship June 20-22. (Contributed)

ALABASTER — The Alabaster 6U Girls Softball All Stars finished second in the USSSA Area Championship June 20-22.

The area tournament started off June 20 with Alabaster 6U defeating Helena 20-7. The team came back the following night and won again, 19-15, over Springville. The girls went into the winners bracket final on June 22 and were defeated by Hoover 19-6.

The loss put the girls into the losers’ bracket final in which the girls came back fighting with a 17-6 win against Springville.

The Championship final did not go as well for the team, as Hoover won 26-15.  The Alabaster girls in three weeks of All-Star tournaments have two tournament championships and one runner-up finish.

The top four teams from this tournament qualified for the State Tournament at Liberty Park June 27-29. The teams that qualified were Hoover, Alabaster, Springville and Hueytown.

Alabaster 6U will start the State Championships on Thursday, June 27 at 6 p.m. versus Hartselle.