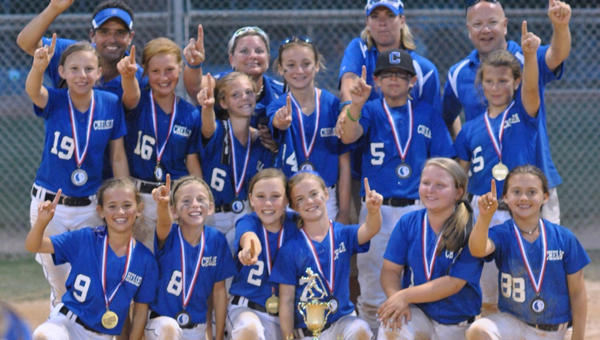 The team won their opening game of the tournament over South Bibb June 20. The team faced North Chilton early in the morning on June 21. Despite an excellent pitching performance from Bella Patterson, the Hornets fell 2-1.

This is where the work back to the finals began. The Hornets defeated Calera, Clanton and North Chilton in the rematch 4-2 to set up a thrilling championship game against none other than North Chilton.

The ever-steady Patterson was once again on her game as she and catcher Ashleigh Donovan led the Hornets to an 8-6 victory in the championship game. Patterson threw in all six games for the Hornets and finished the tournament with 41 strikeouts.

Her coach spoke highly of her performance in the tournament.

“Bella just threw harder and got better with each game we played,” Goss said. “She threw the change up as well as I’ve seen any pitcher throw it all year.”

As well as Patterson was holding down opposing teams with her fastball, Hornets shortstop Natalie Romager was providing at the plate. Romager went 13-19 at the plate including hitting two home runs and three triples.

The stingy Hornet defense gave up only 18 runs in their final 5 games of the tournament.

“Donovan was a difference maker for us behind the plate” Goss said. “She and Romager had an outstanding tournament. Our defense is something we really emphasize so it was nice to see the team come together and get some good stops in the tournament.”

Goss said she was happy to see the team’s hard work in practice pay off with the tournament title.

“Our team motto is, ‘Do all the little things,’” Goss said. “Our players did that as well as some big things throughout the tournament. They deserved the championship.”

Donovan wasn’t just working hard behind the plate. She, Bailey Drew McIntyre and Savannah Trout all blasted home runs for the Hornets during the tournament.

The Hornet outfield had their work cut out for them against the bombers from North Chilton, but Olivia Marshall, Kathryn Miller, Kathryne Thompson, Landry Holt and Savannah Ingram rose to the occasion, limiting North Chilton to just two runs in the Semi-final matchup.

Infielder Katie Goss and Bri Traffica’s outstanding play in the field during the championship game also helped seal the victory.

The Hornets will take on the winner of the Madison-Walker County game in the first round of the state championships.