Erwin brothers back with new film 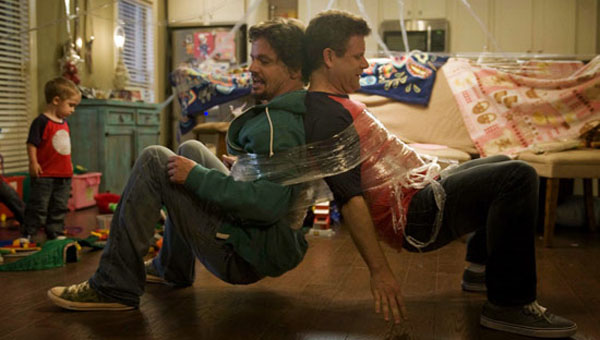 Sean Astin (right) and Kevin Downes get all wrapped up in the joys—and challenges—of parenting in Moms’ Night Out, a new movie directed by Shelby County natives Jon and Andrew Erwin. (Contributed)

PELHAM – Four screaming mothers storm into a police department. Eventually the taser gets pulled out.

It sounds like a silly joke and punchline, but this scene at the Pelham police station and other shenanigans in the upcoming movie “Moms’ Night Out” were filmed in Shelby County and the Birmingham area, thanks to directors Andrew and Jon Erwin, who are natives of Calera.

The film stars Sean Astin, Sarah Drew, Trace Adkins and Patricia Heaton, who plays the unfortunate mom who gets tased. The film is a bit of a departure for the Erwin Brothers, who were behind the drama “October Baby.”

“Moms’ Night Out” follows a young couple who switch roles for a night. Sarah Drew’s character is stressed out from taking care of several young kids. To allow her a bit a of fun, her husband, played by Astin, takes on parenting duties for a night, while she enjoys a night out with friends. This means parenting nightmares for Astin’s character and an unexpected adventure for the mothers.

Jon Erwin co-wrote the film, which is scheduled for theatrical release in 2014, with Andrea Nasfell and co-directed with his brother, Andrew.

Producer and actor Kevin Downes said he is thrilled about the movie’s themes about parenting and marriage. He said there was “so much gold to mine from” and family comedies aren’t as common these days.

“I think (families) are a very underserved market,” Downes said. As the father of two with a third on the way, he understands the need for more relatable family comedies.

“I think it’s a really fun film for everyone,” he said.

Birmingham’s impact goes beyond locations and crew. The motorcycle ministry group Birmingham Hogs rode with country music star Trace Adkins to prepare for his role as Bones. Downes said a pair of “rambunctious and energetic” twin boys in the film were discovered at a local Cuban restaurant.

The Shelby County connection is also evident in the directors’ consultants – their own wives, Mandii and Beth, who are from Helena and Alabaster respectively.

In fact, a key scene early in the movie includes one of Mandii’s suggestions.

“You’ve got to put chocolate in there,” she told Andrew.

“Moms’ Night Out” is scheduled for release in 2014. For more information, visit Momsnightoutmovie.com.