Man charged with trying to run over police pleads not guilty 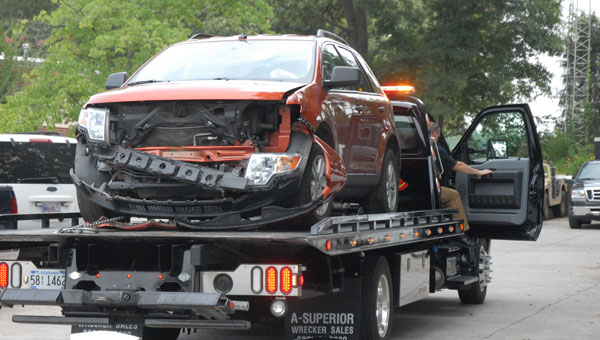 A wrecker transports Richard Philpot’s heavily damaged Ford Edge after police said the suspect allegedly tried to use the vehicle to run over two Helena police officers in 2012. (File)

A Shelby County man charged with trying to run over two Helena police officers in 2012 recently pleaded not guilty to the charges, and is scheduled to appear in court in August.

Richard Shane Philpot pleaded not guilty to two counts of attempted murder, according to Shelby County Circuit Court documents. Philpot is scheduled to appear in front of Circuit Court Judge Dan Reeves for a status hearing on Aug. 5.

Police arrested Philpot on July 2, 2012, after a more-than-45-minute car chase through several jurisdictions.

The pursuit began shortly before 1:30 p.m. when Bessemer officers attempted to stop Philpot’s vehicle on narcotics charges. Officers called off the case and notified the Helena Police Department when the pursuit reached speeds in excess of 100 miles per hour, according to Helena police.

Helena police said the pursuit then led into a subdivision off Shelby County 93, where Helena Police Department Sgt. Chris Rollan said it “appeared the suspect was going to stop.” When another officer exited his patrol car, Rollan said Philpot attempted to strike the officer before fleeing the scene.

The pursuit then continued into Bibb County and onto Interstate 20 before ending in McCalla when police said Philpot jumped from his moving vehicle. Philpot’s unmanned SUV then struck an unoccupied house, according to Rollan.

Philpot currently is being held in the Shelby County Jail on bonds totaling $61,000.

How would Pelham de-annexation work?

Jason Rhoads and several other Chelsea parents said they are considering de-annexing from Pelham during a recent public hearing. (File)... read more