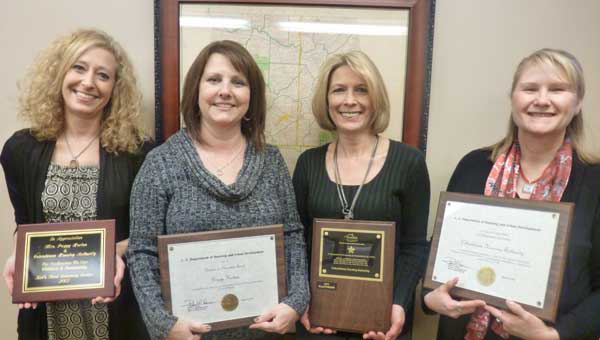 • Kid’s First Learning Center Award gave the CHA an award in appreciation for dedication to children living in the housing complexes.

• The Alabama Housing Authority Risk Management, Inc. awarded CHA the Platinum Award in Recognition of Outstanding Achievement in Loss Control, which keeps insurance cost down. There were no injuries in 2012 in complexes managed by the CHA.

• The U.S. Department of Housing and Urban Development awarded CHA a Certificate of Excellence for Outstanding Program Management with an overall PHAS score of 90%. In addition HUD, awarded CHA the Partners in Education Award.

Executive Director Peggy Horton, who has been in the position since 2006, said she is proud of the work the CHA has done. Her staff includes Financial Manager Michele Nielsen, Section 8 Manager Cindy Ellison and Public Housing Manager Wanda Kirkland.

CHA manages income-based housing where a person’s rent is decided based on his or her income. CHA manages eight sites with 161 units of public housing complexes, in addition to 79 vouchers of rental houses. The focus of CHA is to help people get on their feet and to get deserving people to live in public housing. Every applicant is screened for criminal and sex offender status.

The CHA also offers a scholarship program, which raises money for scholarships for children who live in public housing.

Mumford and Sons coming to Pelham