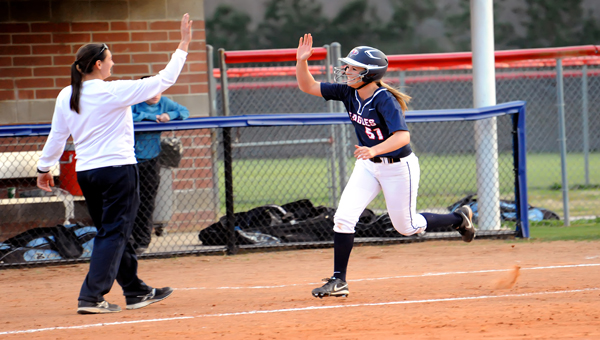 NORTH SHELBY — It’s safe to say that leadership comes in two forms: tangible and intangible. The first comes in the shape of statistics, wins and accolades. The second comes in moments when a team can be lifted by the attitude, mindset and performance of an individual who sees an opportunity to change the game and takes it.

Her offensive statistics alone are impressive, as she batted .446 on the year, knocking in 12 home runs and 64 RBIs. Once she got on, she stole 27 bases.

She led the team in nine offensive categories, and finished her career with a school-record 37 home runs.

While Seitz’s production at the plate established her as the Eagles’ go-to player, Oak Mountain head coach Kellie Eubanks said her actions made her a team leader.

“She’s a great team player,” she said. “She’s very selfless. She became a leader for us in every category.”

“It’s always great to have a player like Caroline,” she said. “When she gets on board, everyone follows her lead. It’s nice.”

In addition to the being the Reporter’s Player of the Year, she was also a selected as a member of the Alabama Sports Writers’ Association’s Class 6A All-State team. During her senior season she led the Eagles to the AHSAA Class 6A South Central Regional Semifinals, where they fell to Thompson, 6-2.

Eubanks said Seitz’s future, which includes playing softball for the Mississippi State Bulldogs on a scholarship, will be one to watch.

“I think she has a bright future,” she said. “She is a great player. I see her contributing over there.”