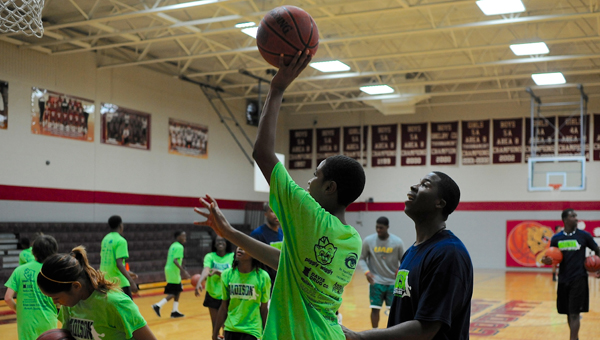 Campers and counselors, including Bobby Madison, work together at the Bobby Madison Basketball Camp in Columbiana on June 28. (Reporter Photo/Jon Goering)

More than 120 students aged 6-17 attended the two sessions per day, which were split by age, with younger students attending in the morning and older ones in the afternoon.

Madison said he started the camp as a way to give kids a love for basketball, which gave him opportunities to travel the world. He said while basketball has become a game that attracts fans because of high-flying offenses, he wanted to teach the basics of the game.

“The main thing is fundamentals,” he said. “I think they’re a lost art in basketball. I want all of them to understand basketball terminology, the basic fundamentals, then work them up.”

Several campers said they felt the drills they ran at the camp were helping their skills already by the end of the week.

John-Thomas Owen, a rising freshman at Shelby County High, said he felt the camp taught him “just to stay focused, and work your hardest.”

Tyler Holmes, 15, said he enjoyed the drills, but felt the actual competition helped him the best.

I like the contests, because I’m competitive,” she said. “They reward you if you try your best.”

At the end of the week, the camp awards specific students for their performance, as well as their attitude.

The Sportsmanship award winners were Addison Grigsby, Clete Ponder and Jordan Eggelston. Jaiden Bush and Larz Hatchett were the Camp MVPs. Jon Michael Gray was the Hotshot champion for the week, Kason Mitchel was the Knockout champion and Cason Jeffries took home the free throw championship.