Chelsea Church invites community to grow on its land 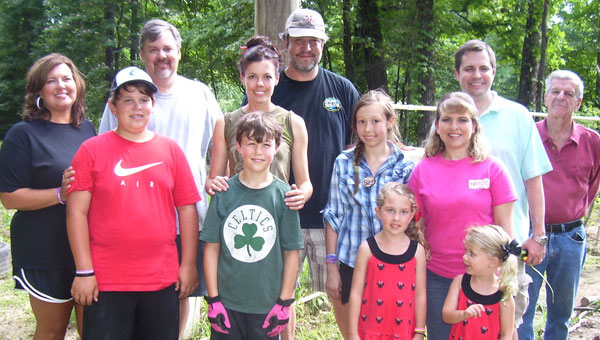 Founded around six years ago, the congregation meets in the little white building previously occupied by the K-Springs Church of God. While making plans to grow their facilities on their own property, they have grown in attendance and ministry, and have begun growing a new kind of crop — vegetables — on their property.

“The garden is for the whole community,” Bill Wheeler told me. We’ve had a couple of work days where people came to help install the irrigation system and clear brush. But gardeners can work whenever they’d like to and do anything they like with what they grow.”

Seven families are participating so far, he said.

When I went by last Saturday, I met Mr. Wheeler and three of the families: Cammie, Sandy, 12-year-old Sage (who was spraying her peas, carrots and gourds) and Grey Sanders; Jennifer, Jeff and Joel Posey; Brooke, Matt, Lilly and Claire Jackson.

The enthusiastic gardeners are growing everything from peas, tomatoes, peppers, okra and watermelons to sunflowers.

The Kratzs are experimenting with something called, “The Three Sisters,” where corn, beans and squash are planted together, Cammie Sanders told me.

Despite being attacked by Japanese Beatles, the Jacksons have a variety of flourishing plants, including good-looking bean vines. While I was at the garden, their tiny daughters Lilly and Claire picked and proudly displayed a squash and tomato from their plot.

Five-year-old Savanna Sikes also has a mini-plot of her own.

“The garden is one big science experiment where you learn by doing,” Cammie said.

She said she’s learned “It’s worth looking under every single squash leaf and smashing squash bug eggs before they hatch.”

And “You don’t take long vacations when it’s time to stack another tire on your potatoes.”