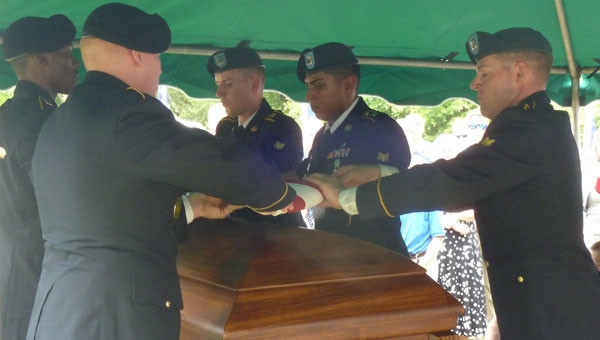 The U.S. Army Funeral Detail from Fort Benning folding the American flag over the casket of the remains of MSGT. Oren Williams whose remains were identified after 63 years. Williams dog tag is hanging on the side of the casket. (Photo by Phoebe Donald Robinson/For the Reporter)

U. S. Army Master Sgt. Olen Berry Williams was laid to his final rest at Evergreen Cemetery in Verbena on Sunday, June 9. It was a long journey home after being declared missing in action during the Korean War more than 63 years ago.

Olen and his brother, Owen, were born on March 20, 1913, twin sons of Lewis and Lizzie Williams, who had 16 children. Susan Conn of Main Street Florist in Columbiana and her sisters, Martha Bath and Sybil Jones, are Williams’ great nieces. Conn’s grandmother, Leona Victoria Williams Headley, was Williams’ sister, and her mother, Luverne Williams Polk, is Williams’ niece. Polk, Conn and Bath attended the funeral along with hundreds of relatives honoring their uncle and great uncle. June 9 was the annual homecoming day for the family.

Williams enlisted in the army in 1940 and trained at Ft. Benning and in England. He landed with 8th Infantry Regiment, 4th Infantry Division with the first wave of troops on D Day at Utah Beach, Normandy, on June 6, 1944. He was later wounded in France but continued to fight in central Europe after his recovery till the war ended. After World War II, Williams served stateside and in occupied Japan.

When the Korean War broke out, Williams was a member of K Company, 31st Infantry Regiment, 7th Infantry Division which inserted at the Inchon Landing to repel the North Korea forces from South Korea. He later fought at the Battle of Chosin Reservoir where on the night of Nov. 27, 1950 Chinese overwhelmed the army forces. In 33 degrees below zero weather, 2,504 out of 3,288 soldiers were lost. On Dec. 12, 1950 Williams did not answer the muster roll call and was declared MIA. On Dec. 31, 1953 he was declared KIA.

In 1954 the Chinese government exchanged the remains of 4000 soldiers who were buried in the National Veterans Cemetery in Hawaii in unknown graves. In 2012, Williams’ body was exhumed and a positive DNA match was made on April 2, 2013.

Williams was flown home to Alabama and buried with full military honors assisted by the funeral detail from Ft. Benning and the Patriot Guard riders. After 10 years in the military, combat action in two wars and 63 years MIA/KIA, Oren Williams, the highly decorated noncommissioned officer with the Bronze Star and Purple Heart, was buried next to his parents – home at last. May he rest in peace.