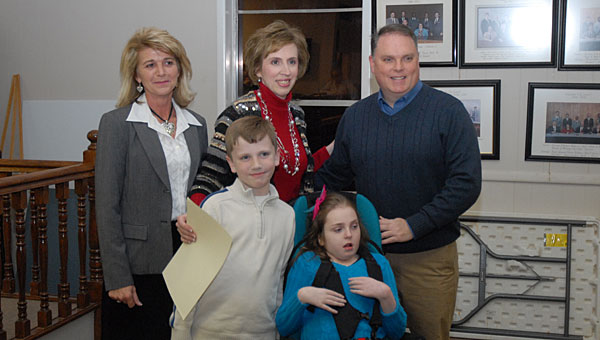 After several years of work inventing and marketing a grocery cart for special-needs children, Alabaster’s Drew Ann and David Long are finally seeing their dream come true this month.

On July 18, the Long family will travel to Newton, N.C. to the Technibilt manufacturing facility to kick off the wide-scale production of Caroline’s Cart. The cart was originally designed for and named after the Longs’ daughter, Caroline.

Caroline, who is now 8 years old, was diagnosed at 4 years old with Rett’s syndrome, a nervous system disorder affecting movement and expressive language.

As Caroline grew older, she no longer fit in the infant seat on traditional shopping carts, making it difficult for her mother to take her grocery shopping.

The Longs attempted to locate a product to alleviate the problem, but were unable to find one, according to Drew Ann Long.

After designing a cart to fit Caroline’s needs, the Longs worked with regional supermarkets such as Belle Foods to roll out Caroline’s Cart on a limited basis.

Over the past several months, the family has signed over sales and production of the cart to Technibilt in preparation for the product’s national launch.

“There really are no words. This is something I have dreamed about and believed in with every fiber of my being,” said Drew Ann Long.

After the national launch on July 18, Technibilt will begin mass-producing the carts on Aug. 1.

“You do not realize the need for this product until you see special needs people in the store actually using this product,” said Technibilt Vice President of Sales and Marketing David Orfinik. “It is heartwarming to know that you’re helping a part of the community that sometimes does not get (the) attention of everyone.”

Several national retailers have already pre-ordered the cart, according to Technibilt.

“They are handling everything now,” Drew Ann Long said of Technibilt. “We are so excited.”

CHELSEA — The Chelsea High School girls’ basketball team will be hosting a skills camp from July 8-11 at the... read more