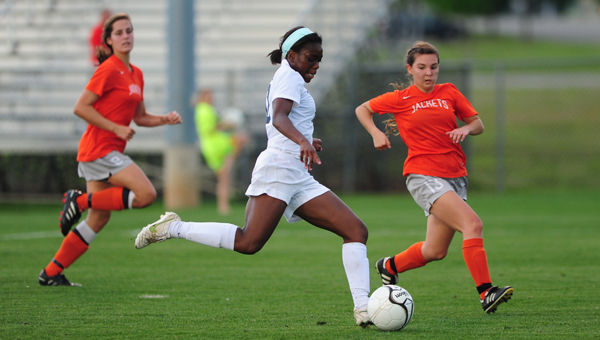 Oak Mountain’s Toni Payne, above, and Chandler Stroupe are the 2013 All-County Soccer Players of the Year.

NORTH SHELBY — If those selected as the 2013 Shelby County Reporter All-County Soccer Players of the Year are any indication, it’s just a matter of time before Shelby County becomes one of the nation’s best hot spots for soccer talent. Both were selected as the Gatorade Players of the Year for soccer from Alabama, and both are headed to prominent collegiate programs in the fall.

The choice for girls’ soccer is Toni Payne. Payne is not only the leading goal scorer on the Oak Mountain Eagles squad, she is also the leader in assists.

“No matter if we’re up or down, I can count on several players, especially Toni,” he said. “I can put her anywhere and she’ll fix what’s going wrong.”

Payne helped lead the Eagles to the 2012 AHSAA Class 6A State Championship as well as the runner up spot in 2013.

In addition to her work for the Eagles, Payne is a member of the U.S. National U-17 squad. She will head to Duke University on an athletic scholarship in the fall.

“I really believe there will be a day when you turn on your TV and see her playing on the U.S. National Team,” he said.

To see how stout Oak Mountain is in soccer, one needs to look no farther than the Shelby County Reporter Boys’ Player of the Year, Chandler Stroupe.

Stroupe, like Payne, helped lead his team to a runner-up finish in the 2013 AHSAA Class 6A state title game, and was praised by his coaches for his versatility.

“It allows us to be flexible with formations,” said coach Mike Howard. “(Our) game plan allows him to control every aspect of the game.”

Control he did, as Stroupe registered 16 goals and 12 assists, high numbers considering Stroupe’s primary position as a defender.

Stroupe is headed to UAB in the fall on a partial soccer scholarship, with the chance to earn a full ride after a year.

“If you’re going to try to build a perfect high school athlete in soccer, he brings a lot of different qualities,” Howard said. “If you need a big play, he’s capable of making big shots.”

CHELSEA — The Chelsea High School girls’ basketball team will be hosting a skills camp from July 8-11 at the... read more