Hardin, 10, can prove his fish story 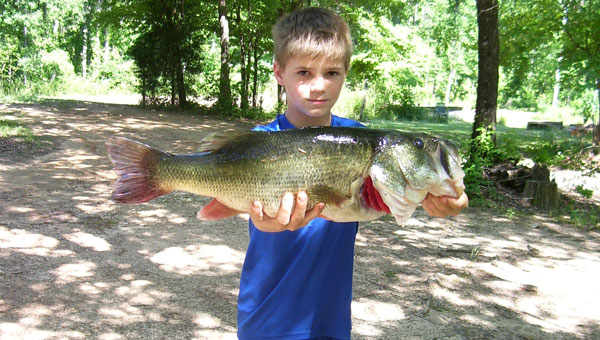 Ten-year-old Tyler Hardin shows off the 8 pound, 1 ounce bass he caught in a neighbor’s lake, before he and his “Paw Paw” Larry Nivens take it to be mounted. (Contributed)

Tyler Hardin, 10, has been fishing since before he was big enough to hold a pole by himself. By age four, he would sit on a lake bank for hours holding a reel and rod, with his eyes on the line in the water waiting for it to jerk.

“I always stay ‘till I catch something,” he said.

The eight pound, one ounce Bass he caught in a neighbor’s lake this spring was his biggest catch yet.

“I caught it by the pole on a rubber worm,” Tyler said. “Alex (a teenager) was fishing there and I was waiting for him to move. Then I went over there and caught the bass.

“Paw Paw had told me to always hold it (the fishing rod) where it’s just there between my feet and knees when I pulled one out. He broke my pole (rod) but I got him out. He got tangled up in the grass and it broke again. Alex was on the other side of the lake and said, ‘You need some help?’ and I said, ‘Yeah,’ but I got it untangled before he got over there.”

Tyler said when he took the fish home and walked in the house, he said, “Look what I caught,” and his Paw Paw (Larry Nivens) told him to put it in the bathtub. Then they put it in a bucket of water in the back of his Paw Paw’s pickup and took it up to Chelsea, “to the building by what was Ruff and Tuff, for them to mount it,” he said.

The fish is presently still at Tough Target Taxidermy in Chelsea, but Tyler is anxious to get it home where he can have it put up on the wall.