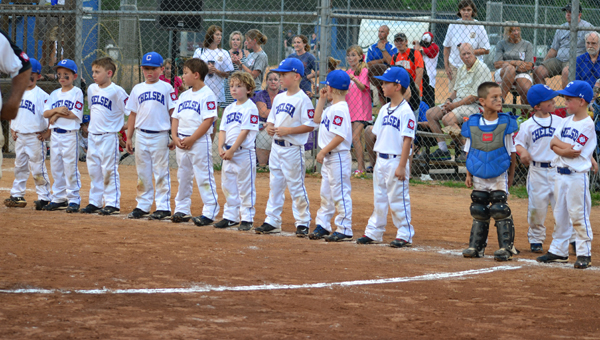 Chelsea’s popular baseball team, the “Pain Train,” is headed to the 6U Dizzy Dean World Series in South Haven, Mississippi on July 12.

Chelsea’s popular baseball team, the “Pain Train,” is headed to the 6U Dizzy Dean World Series in South Haven, Mississippi on July 12.

The rise of the “Pain Train” began in a small district tournament held in Chelsea. With school being out, a number of Chelsea residents migrated to the Chelsea ballpark. That same night, the Pain Train happened to be playing against powerhouse Clanton in the district tournament.

The Bombers from Clanton took a commanding 13-0 lead and there appeared to be little interest in the game from the spectators at the park.

All of a sudden the “Pain Train” was starting to draw some attention.

“It was kind of funny,” Head Coach R.J. Hughes said. “We were getting beat pretty bad and it was like there was nobody at the ball park. All of a sudden we get some big hits, and it was like the whole town of Chelsea was surrounding us cheering us on.”

The Pain Train capped an amazing comeback to win the game on left fielder Parker Sizzko’s double which scored the winning run.

After the tourney the “Pain Train” was no stranger to the people of Chelsea.

“It has just been a crazy run,” Assistant Coach Mike McNamee said after the Pain Train captured the area tournament in Clanton on June 22. “I walked in Zaxby’s the other day and people said, ‘Hey, aren’t you a part of the Pain Train?’”

Leadoff batter Aiden Hughes arguably starts the momentum for the Pain Train. Hughes nabbed the MVP award in the district tournament due to his .913 batting average and play in the field as the middle infielder.

Another big hitter for the Pain Train has been rightfielder Tucker Bradberry. His three-RBI single against Columbiana in the West End Tournament started a seven-run inning.

Hughes said his biggest problem going into the tournament was securing spots in hotels for what seems like half of Chelsea’s population.

“It’s funny,” Hughes said. “The community has just taken this group under their wing. It’s a real tribute to the kids.”