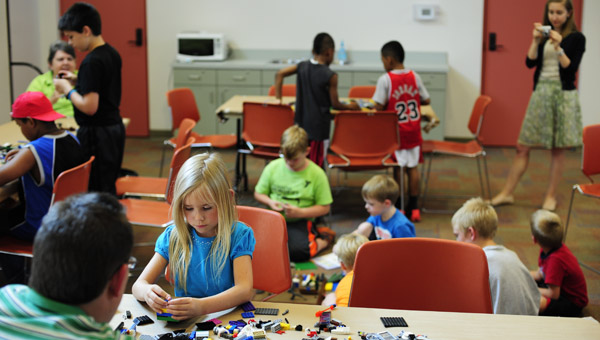 On Tuesday afternoons, dozens of children flock to the Albert L. Scott public library for its weekly Lego play sessions. The children, who are known as the “Lego League,” range from toddlers to pre-teens and are often found building houses, submarines and other creations.

The Lego League has existed for about three years now and meets weekly during the summer and once per month during the school year, and it attracts a wide range of ages, said Frances Smith, Albert L. Scott’s youth services librarian. Usually, Smith sees anywhere from three to 35 kids in attendance ages two to 12.

“I see kids cooperating, making new friends and working on group projects,” Smith said. “I think they were already creative, and this just brought it out.”

Rebekah Steelman, an intern at the library who works in the children’s department, said many kids come to the Lego League who don’t come to other library programs.

She enjoys getting to see their different personalities. Some kids, like 4-year-old George Ingrey, come to the library and seem to make the same creation every week. Others, like George’s 10-year-old brother Xander Pineda, make something different each time. This week, he made a submarine.

“I love Legos, and most of these Legos I do not have at my house,” Pineda said. “I lost all of my light sabers.”

Today, Reagan has made a house complete with a bathtub, dining table, tea pot, a vase of flowers and a dog.

“They get to play with other kids,” Turner said. “It gives them a break and lets them get out and do something, and they both seem to love it.”