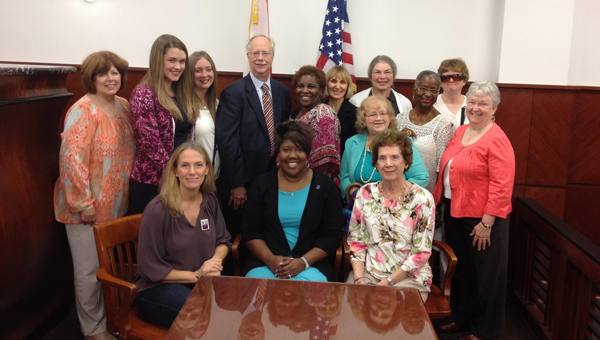 COLUMBIANA – Prospective political candidates and other interested community members gathered at the Shelby County Courthouse Thursday, July 11 for an informal public forum about the state- and local-level election process.

The forum, called “Election, Voters, and the Law,” was sponsored in part by The 2014 Project Alabama, a statewide nonpartisan campaign focused on increasing the number of women in elected offices. The Birmingham branch of the American Association of University Women also sponsored the event.

The meeting began at 10 a.m. with about 20 people in attendance and a brief introduction by Audrey Salgado, chair of The 2014 Project, who said this is the first of meeting of its kind.

Discussion was then led by Shelby County Probate Judge James W. Fuhrmeister, who outlined his role as probate judge in the election process, discussed new laws that require voters to show picture IDs at voting polls and fielded questions regarding the current political climate as well as resources for women interested in running for office.

“Having run for office myself, it is not the most pleasurable experience I’ve ever had,” Fuhrmeister said. “But I also know of no higher honor than serving the citizens of Shelby County. I encourage anyone interested in running for office to do it.”

“Women bring a perspective to local office that men don’t have,” Fuhrmeister said. “I miss having a woman at that table.”

He also discussed the 1965 Voting Rights Act that was recently ruled unconstitutional by the U.S. Supreme Court, which he says has made his job much easier because it will allow him to bypass time-consuming paperwork and approval processes to make necessary changes during elections, such as the location of voting polls when old locations are no longer in good condition.

Regarding new laws that will require voters to present government-issued photo IDs when voting, Fuhrmeister said the laws are about security. Before, voters could present more than 31 forms of ID including a power bill, he said.

For anyone interested in running for office, Fuhrmeister said to seek out resources from local political parties, the city clerk’s office or the Alabama Secretary of State’s office, where interested candidates can learn about residency requirements, campaign deadlines and more.