Blueberries by the gallon 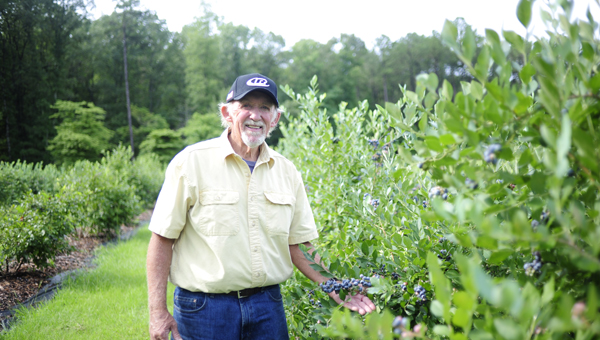 Jim Suttle grows blueberries and blackberries for customers to pick at Mountain Meadows Farm in Columbiana. He sells berries for $12 per gallon. (Reporter Photo/Jon Goering)

It’s July in Alabama, which means berry season is in full swing, and farms across the state are opening their patches to interested customers. Just because you don’t have any berry bushes of your own doesn’t mean you can’t pick your own. You just have to know where to go.

In Columbiana, head to Mountain Meadows Farm on Highway 30, where Jim Suttle offers blueberries and blackberries for picking. This is Suttle’s first year offering blackberries, though he has been offering blueberries for three years now. He has around 900 plants and expects to sell somewhere between 1000-1500 gallons of berries this year, which he sells at $12 per gallon.

Suttle said customers come back to pick berries about three times throughout the season, and he thinks people come back for the health benefits, as he grows all of his berries organically, without chemicals.

Morgan Creek Vineyards in Harpersville also offers berry picking. Unlike Mountain Meadows, the Morgan Creek blueberry patches have been making berries for about 20-25 years. Though known for its wines, the blueberry bushes actually existed before the winery.

“We’re in the midst of blueberry season right now,” said Paula Tompkins, an employee of Morgan Creek. “We should be winding up within the next couple of weeks.”

At Morgan Creek, blueberry season typically opens on June 15, and berries sell for $12 per gallon. Muscadines will be available for picking at the beginning of August and sell for $5 per gallon.

The winery is open from 10 a.m. to 6 p.m. Monday through Saturday, though Tompkins says most people come in the morning. The number of people that come to pick berries varies, though on Saturdays as many as 20-30 people can be found in the fields, Tompkins said.

“We don’t spray our berries, and people just like to pick their own,” she said. “And it’s more economical to do that do.”

Church of the Highlands members serve the community

A “serve team” from Church of the Highlands volunteered at a SafeHouse of Shelby County shelter on July 13. (Photo... read more